A coalition of Liu Institute fellows with South Asia research interests formed the South Asia Group in 2017. The group has become instrumental in guiding the Liu Institute’s growth and focus in this important region.

The South Asia Group reflects our efforts to expand scholarship, connections, and student experiences focused on this area and its people. Spearheaded by Amitava Dutt, Susan Ostermann, and Nikhil Menon, the group is interdisciplinary and open to all faculty and students with an interest in South Asia. Guided by the interests of its members, the South Asia Group hosts a variety of South Asia-related programs throughout the year, including regular seminars, panel discussions, and lecture series, all of which are supported by the Liu Institute. The group also works closely with the Notre Dame Global Center in Mumbai, India, to develop links with local universities and colleges.

Friday, March 5 at 10 a.m. on Zoom
"Why India's Farmers are Angry with the Narendra Modi Government": A Lecture by Paranjoy Guha Thakurta

Since late November, hundreds of thousands of farmers in India—many of them from the northern states of Punjab, Haryana, Rajasthan and Uttar Pradesh—have been protesting on the outskirts of New Delhi. They are demanding the repeal of three laws enacted by Parliament that would eliminate current government protections and allow large companies to drive down prices. Despite eleven rounds of talks, representatives of Prime Minister Modi’s government have not agreed to the demands of the protesting farmers. The government has consented to postpone the implementation of the laws by a year and half, but the farmers (represented by more than 40 organizations and unions) have not agreed. Government spokespersons have alleged that the farmers are being misled by separatists and left-wing extremists, but the farmers argue that their struggle is for a better livelihood and a more secure future. The agitation by farmers is arguably the biggest challenge faced by the Modi government since it came to power in 2014.

Paranjoy Guha Thakurta is an author, publisher and educator whose four decades of experience involves print, radio, television and documentary cinema. Publications include Media Ethics (Oxford University Press), and The Real Face of Facebook in India and former editor of Economic and Political Weekly. His main areas of interest are the workings of the political economy and the media in India and the world, and he has written books and directed and produced documentary films on these topics.

The Anthropology Department is pleased to invite you to its 2020-2021 Inaugural Speaker event. This event was rescheduled from Fall 2020 due to COVID-19 to Spring 2021.

This year’s talk, entitled Love and Other Injustices: On Humans, Animals, and an Ethics of Indifference will feature Dr. Naisargi Dave, Associate Professor of Anthropology from the University of Toronto.

The talk will take place via Zoom on March 15, 2021 from 3:00-4:30 pm. We believe that many of your faculty members, fellows and students may find the talk to be of interest and hope that you might share the attached flyer and registration information. 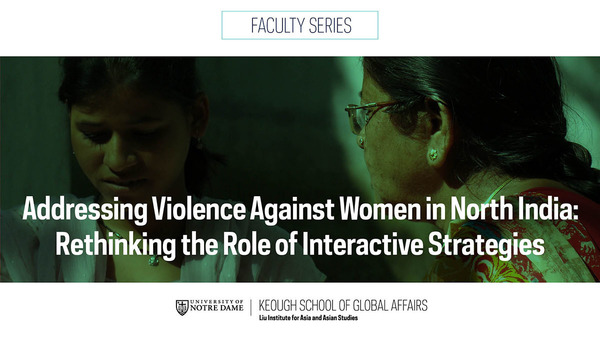 Wednesday, March 21 at 11 a.m.
"Addressing Violence Against Women in North India: Rethinking the Role of Interactive Strategies": A Lecture by Julia Kowalski

When scholars evaluate and compare efforts to end gender violence around the world, they often focus on debates about how to define “violence,” asking whether various institutional actors share a definition of gender violence that reflects an understanding that gendered violence is a violation of survivors’ rights. In this talk, however, I suggest that we expand our analysis to include careful attention to how institutional actors conceptualize the role of interactive practices in addressing violence. Drawing on long term ethnographic fieldwork with women’s rights NGOs in Jaipur, the capital of the north Indian state of Rajasthan, I argue that NGO staff deploy diverse, sophisticated models of how spoken interaction might ameliorate situations of household violence. These models both reflect and transform, in turn, widely shared understandings of how people’s interactive behavior marks them as good kin and modern individuals—understandings that anthropologists call “language ideologies.” By attending to the role of language ideologies in anti-violence interventions, scholars of gender violence can develop richer models for comparing approaches to violence. At the same time, this analytic perspective raises new questions about what universalizing models of gender violence take for granted about rights, relations, and personhood.

Julia Kowalski is an assistant professor of global affairs and a concurrent faculty member in Notre Dame’s Gender Studies Program. She is a faculty fellow of the Liu Institute for Asia and Asian Studies. A cultural anthropologist by training, she completed her PhD in the Department of Comparative Human Development at the University of Chicago. She has been conducting fieldwork in North India since 2007, focusing on issues of gender, kinship, women’s rights, personhood, gendered violence, and everyday institutional practices.