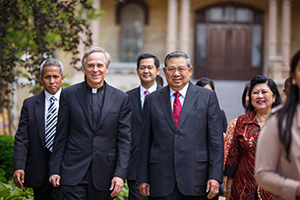 Susilo Bambang Yudhoyono, the former president of the Republic of Indonesia, spoke at the University of Notre Dame’s inaugural Asia Leadership Forum last week at the invitation of Notre Dame’s president, Rev. John I. Jenkins, C.S.C.

The forum featured a panel discussion, “Indonesian Islam: A Force for Democracy and Peace,” and was sponsored by Notre Dame’s Liu Institute for Asia and Asian Studies.

A former military leader who became Indonesia’s first directly elected president in the democratic era, Yudhoyono is one of Asia’s most respected statesmen. He also is an advocate for peaceful and moderate Islam and closer relations between the Western and Islamic worlds.

“As a former president of the country with the largest Muslim population in the world, this is certainly a subject that is dear to my heart,” Yudhoyono said, “and something that I have thought about deeply in my military career and subsequently in my political career. I do believe that Indonesian Islam is a force for peace and democracy, not just internally within Indonesia, but externally in the Islamic world and beyond.”

Yudhoyono held up his own country as an exemplar of the compatibility between Islam and democracy.

“Islam came to Indonesian shores not by force but by way of trade and by persuasion,” he said. “Islam, therefore, had to peacefully adapt and had to become tolerant and respectful of other faiths in the archipelago. After centuries of practice, this moderate, tolerant, and open brand of Islam became the character of mainstream Islam in Indonesia.

“This is what happened for centuries and happens today in modern Indonesia, where Muslims live side by side peacefully with Christians, Catholics, Hindus, Buddhists, and Confucianists in a republic which recognizes all their religions and guarantees religious freedom.

“Indonesian Muslims see no contradiction between their faith in Allah and their civic duties in our democracy. Indonesians, indeed, have become very demanding: They will not vote for politicians if all they do is wave their religious identity, but prefer to vote on the basis of platform, integrity and other reasons.”

Yudhoyono expressed his conviction that Indonesian democracy has achieved irreversibility: “A military coup is unthinkable in Indonesia, and those who are looking for a happy direction for the ‘Arab Spring’ might try looking for an ‘Indonesian Summer.’”

According to Yudhoyono, “a fundamentalist attitude to freedom of speech will only widen the gap between Islam and the West. What we need is reason. We need compassion, not provocation but persuasion. We need to build bridges, not burn them.

“I was touched when Pope Francis visited Bosnia and delivered a message of peace and reconciliation,” Yudhoyono said. “We need more of this positive example. We need to continually erase the fault line and reach out. That is how we build better relations between Islam and the West, relations based on respect and harmony.”