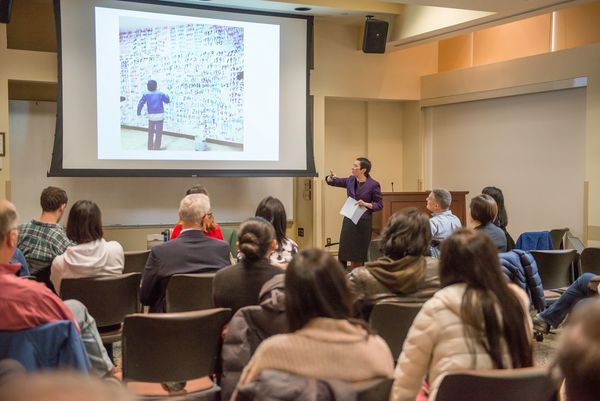 An Ant Dying on Sugar

At a very young age, my grandfather told me a story about ants dying on sugar. “Ants love sugar,” he said, “so you offer them a jar full of sugar because you want them to be happy and unworried, but do you know what will happen instead? They will die because of dehydration, slowly, sweetly, and without realizing it.” From then on, that story never left my mind. I often found myself asking, is an ant dying because of sugar a sweet ending? If all things have to die one day, is it better for them to die without pain, filled with joy, having no idea what really happened? These same questions were provoked after I met and talked with Louisa Lim, the well-known journalist for NPR and BBC, and the author of The People’s Republic of Amnesia: Tiananmen Revisited.

During her two-day visit to Notre Dame in November 2017, Louisa Lim attended two student roundtables held by the Liu Institute for Asia and Asian Studies, co-sponsored by the Kellogg Institute for International Studies, and gave a lecture titled “China’s War on the Past: Remembering Tiananmen in Xi Jinping’s China.” Sitting closely with students who are interested in learning this concealed part of Chinese history, Lim answered questions about Tiananmen in 1989, recalling from her experiences and reflections of this contested period in Chinese history. “No, I’m not a storyteller,” Lim said, “I’m just a reporter. I’m not on either side, I just… collect and report.”

Through the discussion of what word should be used to describe this period of history, Lim expressed her ongoing difficulty in naming the event. “I was thinking about massacre, but I was warned by my editor that this word has too much political meaning,” Lim said, “Crackdown? It doesn’t reflect the killing. Or should I use ‘incident’ just like the government-approved name?” According to Lim, even after her book was published, she is sometimes still undecided about what to call the series of events that took place from April to June 1989. The choices are either unable to accurately describe the duration and extent of the nation-wide crackdown, or have strong political implications. Such difficulty in determining the name reflects the high sensitivity and complexity of the events. It also implies a core question that remains unanswered—who is to blame for the 1989 crackdown?

During both sessions of the discussion and the lecture, Lim brought up a question that surfaced throughout her investigation: “How could people just forget about living memory?” Now, she seemed to have an answer. Lim described the “national amnesia” as a collective effort between the Chinese government and its citizens. “People allowed themselves to become a part of government-governed memory removal,” she said, “for them, questioning is not convenient. It’s too expensive.” What she points out sharply is that the successful removal and burial of the 1989 crackdown is no longer “a crime committed by a small group of people, but one in which we all participated.” For people who witnessed, joined, or led the protests during 1989, continual mental and physical suppression on themselves or on others has taught them the trade-off of remembering. For the sake of their families and wellbeing, they choose to be silent, and even further, they teach their children to be silent about the 1989 crackdown as well. “History has become political.” Lim said. In spite of the booming economy and better standard of living , the Chinese Communist Party have made the revelation of any negative history arduous and unrewarding. For people of younger generations, arguably from the moment they were born, they have been living happily under the umbrella of protection of the Chinese government, learning about past, painful times during which the Chinese Communist Party came to rescue, bringing life and hope back to the nation again and again. Expecting Chinese citizens to question the morality of its government’s past decisions seems to be a complete fantasy. Lim mentioned that in a field experiment carried out by Yuyu Chen and David Y. Yang in 2017, hundreds of college students were given free access to foreign websites through a VPN service that could surmount the Chinese Internet firewall, but after a year, only half of the students used the VPN, and even fewer of them used the VPN to learn about the 1989 crackdown. Under the collective result of fear and ignorance, a majority of Chinese people automatically join in the construction of a new “political firewall”.

When a Chinese student at the lecture questioned Lim about the objectivity of her interview, investigation, and book, she said “I would really recommend you do as much reading as you can, to truly understand yourself, to decide yourself what happened, and to see yourself … the conclusion you draw may be different from the one you initially started with … you can educate yourself, make up your own mind, and draw your own conclusions.”

Her words gave me the answer I have always been searching for. Yes, we should learn about history. The truth deserves to be learned, and when we live satisfied by the “informed” version of history, this is no different from the ants dying sweetly on a pile of sugar. The ultimate purpose for us to learn about this history is not to cause chaos, start protests, or to overturn anyone. Instead, what we are fighting for is a truth, a clear mind, and a conclusion that we draw ourselves, which is going to be remembered in an irremovable way.

Lim spoke at the University of Notre Dame on  November 14, 2017 at a lecture sponsored by the Liu Institute for Asia and Asian Studies and the Kellogg Institute for International Studies.