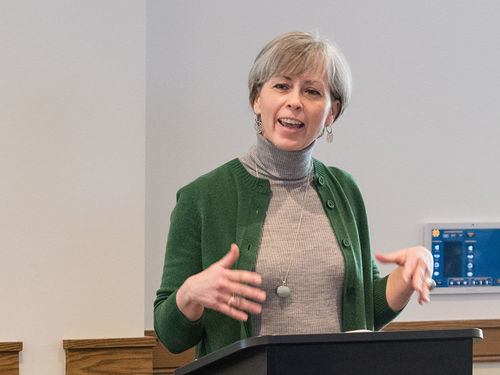 The Chinese Communist Party (CCP) may not historically have embraced the concept of faith, but times are changing, according to China scholar Gerda Wielander

For example, Chinese President Xi Jinping regularly references faith through such phrases as “When the people have faith, the country has strength” and “Belief is the soul of a nation.” Xi also describes Chinese socialist core values as lying at the heart of faith.

Wielander, head of modern languages and cultures at the University of Westminster, London, explained these shifting attitudes on faith in China during a lunchtime lecture at the Keough School of Global Affairs on March 20. Her talk, “What China is Lacking: Faith (信仰) in Political Discourse,” was sponsored by the Liu Institute for Asia and Asian Studies.

As China experiences a resurgence of religion, the word xinyang (faith) is appearing more frequently in political discourse, Wielander said. Through everyday communications channels such as new year’s greetings, songs, and television specials, the CCP encourages a belief system around socialist core values and creates a narrative around the history of the Communist party and its martyrs, who are elevated to near saints.

If these intellectuals disagree about the precise meaning of faith—and which values should underpin it—they agree that faith is necessary in contemporary China.

Wielander is the editor of Chinese Discourses on Happiness (2018) and author of Christian Values in Communist China (2013).