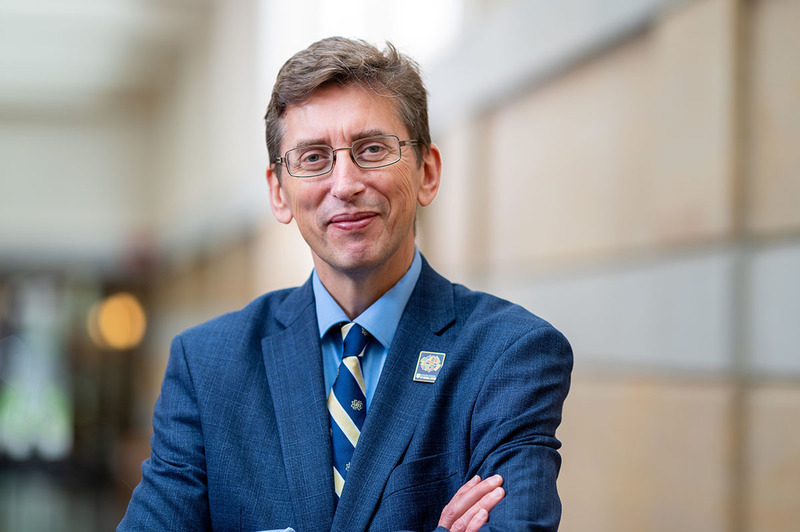 Michel Hockx has accepted a second five-year term as director of the Liu Institute for Asia and Asian Studies at the University of Notre Dame’s Keough School of Global Affairs. His reappointment follows a performance review led by Scott Appleby, Marilyn Keough Dean.

“We have in Professor Hockx a respected and well-connected scholar possessed of shrewd academic and intellectual judgment, an effective and tireless advocate for Asian studies, and a responsible steward and able administrator,” Appleby wrote of Hockx’s reappointment. “Michel has built a vibrant community of faculty, staff, and students dedicated to advancing understanding of and interaction with ‘global Asia.’ I am also grateful to Michel for his important role on the leadership team of the Keough School.”

We have in Professor Hockx a respected and well-connected scholar, an effective and tireless advocate for Asian studies, and a responsible steward and able administrator

Following an academic leave during the 2021-22 academic year, Hockx will begin his second term as Liu Institute director in 2022.

Hockx joined the Liu Institute in 2016 as its founding director. In addition to his appointment at the Keough School, where he serves on the School’s Leadership Council, Hockx is a professor of Chinese literature in the Department of East Asian Languages and Cultures in the College of Arts & Letters.

As director, Hockx leads the Liu Institute in its mission of providing a forum for integrated and multidisciplinary research and teaching about Asia. This includes promoting general awareness, understanding, and knowledge of Asia through events, research by students and 87 faculty fellows, and engagement with partners in Asia.

Under his leadership, the Institute has developed a five-year strategic plan, won a prestigious grant from the Korea Foundation, established connections with organizations and institutions in the United States and abroad, and expanded the University’s Asian studies courses, research opportunities, and events.

Before joining the University of Notre Dame, Hockx served as director of the China Institute at SOAS, University of London, where he oversaw a community of 50 China scholars in a dozen disciplinary departments.

A native of the Netherlands, he studied Chinese language and literature at Leiden University, where he earned his PhD in 1994. He also studied at Liaoning and Peking universities in China.