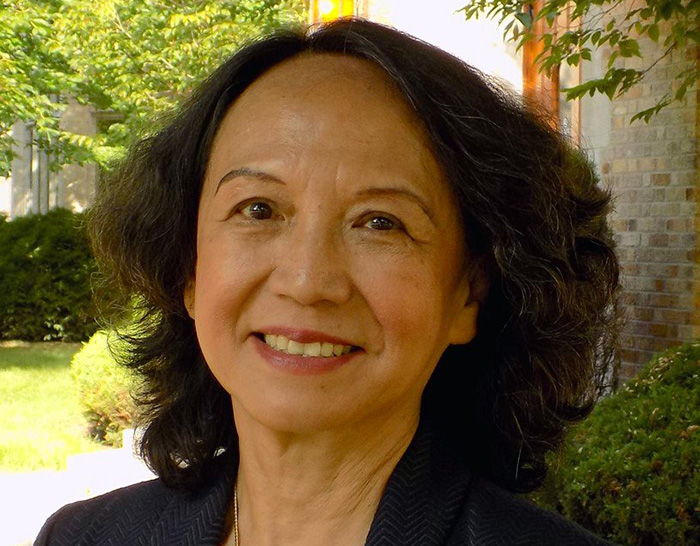 The American Mathematical Association has awarded its Bergman Prize to Notre Dame mathematics professor Mei-Chi Shaw, a Liu Institute fellow, for her many contributions to several complex variables, partial differential equations, and Cauchy-Riemann geometry. She is being especially recognized for her seminal work on the analysis of the ∂ and ∂b  problems in settings where the ambient domain or ambient manifold is nonsmooth, which provides deep insight on the bearing of boundary regularity in the qualitative and quantitative analysis of the problems.

In a series of influential papers joint with Joachim Michel, she has proved that subellipticity does not imply regularity in other Sobolev spaces when the strictly pseudoconvex ambient domain is only piecewise smooth, a result which contrasts with classical work of Kohn and Nirenberg in the smooth setting. Later contributions deal with the more general context of Lipschitz regularity and give definitive estimates that precisely indicate the dependence on the domain’s Lipschitz constant. Her more recent joint works with Debraj Chakrabarti, Siqi Fu, and Christine Laurent-Thiébaut push the envelope further, to the situation of domains with nonsmooth holes, and to the important, “pathological,” example of the Hartogs triangle.

Shaw’s work has had a deep impact in the theory of several complex variables and has generated, and continues to generate, a great deal of interest in the partial differential equations and harmonic analysis communities.

I am deeply honored to be awarded the Bergman Prize. Growing up in a large military family that fled Mainland China to Taiwan in 1949, becoming a mathematician was almost an impossible dream. Yet with the support of my family, teachers, and collaborators, I have had the privilege of doing what I like for a living: solving mathematical puzzles in several complex variables.

I would like to especially thank Professor Joe Kohn, who first introduced me to this beautiful subject and challenged me with its difficult and important problems. I would also like to thank my friends and family who helped me along the way. The journey continues with its bumps and rewards!

Mei-Chi Shaw is a professor of mathematics at the University of Notre Dame. She was born in Taipei, Taiwan in 1955. She attended the Taipei First Girls’ High School from 1970 to 1973, where her mathematics teacher, Mr. Yang Kwan-Man, encouraged her to study mathematics. She received her BS at National Taiwan University in 1977 and pursued a PhD at Princeton University from 1977 to 1981 under the direction of Joseph J. Kohn. While there, she was given a warm-up problem for her thesis on the regularity of the solution to Cauchy–Riemann equations on piecewise-smooth domains. This initial problem ignited her lifelong passion for nonsmooth domains that led to the work cited for the Bergman Prize, as well as other work.

Her  first job was a postdoctoral position at Purdue University, where she began a new direction on the solvability of tangential Cauchy–Riemann equations under the mentorship of Salah Baouendi. She landed her first tenure-track position at Texas A&M, where she had many fruitful collaborations with other complex analysts there. She came to Notre Dame in 1987 as a tenured associate professor and was promoted to full professor in 1992. She had also held visiting positions at the University of Wisconsin, Cambridge University, Institut Fourier, Max Planck Institute, the University of Chicago, the Mittag-Leffler Institute, and Université de Grenoble.

Mei-Chi Shaw is the co-author of a well-received graduate textbook on partial differential equations in several complex variables. She also wrote an article, “A Woman Mathematician’s Journey,” based on her own experience, with the intention of encouraging more women to enter mathematics. She was named an inaugural Fellow of the American Mathematical Society in 2012. Mei-Chi Shaw served as an editor for the Proceedings of the American Mathematical Society from 2001 to 2009 and the coordinating editor for Analysis from 2009 to 2018.

The Bergman Prize honors the memory of Stefan Bergman, best known for his research in several complex variables, as well as the Bergman projection and the Bergman kernel function that bear his name. A native of Poland, he taught at Stanford University for many years and died in 1977 at the age of 82.  He was an AMS member for 35 years. When his wife died, the terms of her will stipulated that funds should go toward a special prize in her husband’s honor. Franc Forstnerič is also awarded the Bergman Prize for his many contributions to several complex variables (SCV), as well as complex geometry and geometric analysis.  Shaw and Forstnerič will split the cash award of US$24,000, the 2019 income from the Stefan Bergman Trust.