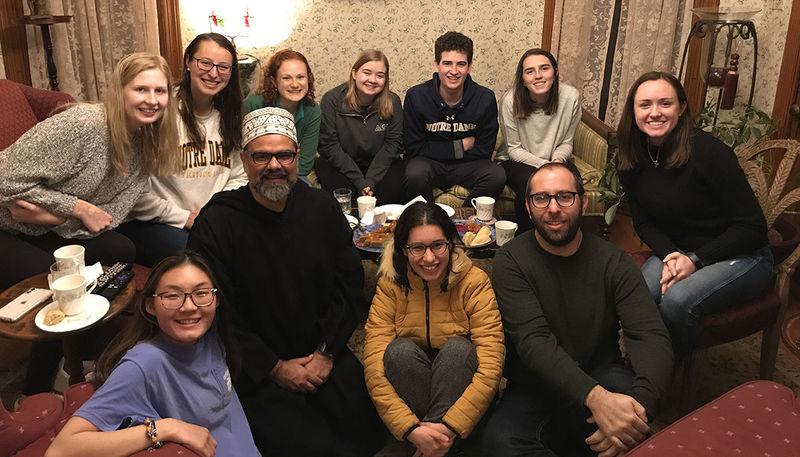 Before Mahan Mirza, executive director of the Ansari Institute of Global Engagement with Religion and Liu Institute faculty fellow, took off for Oman with eight Notre Dame students for the spring break course “Holy Cross-roads: Religion and Politics from South Bend to South Asia,” he checked in with the University to ensure that travel was still safe and approved. It was weeks before the virus started ravaging parts of the U.S. and the U.S. Department of State’s  advisory against international travel. While waiting in line to board their plane, members of the group started getting messages about Harvard and Georgetown converting to online courses for the rest of the spring semester but Notre Dame officials had not yet decided to go virtual.

Feeling assured that they would be safe in Oman — listed as a level-one country, the State Department’s safest designation — the group pressed on in hopes of furthering intercultural and interreligious dialogue along with eight students from Notre Dame University Bangladesh (a separate institution also affiliated with the Congregation of Holy Cross). The 16 students, along with Mirza, instructor Jason Klocek and Notre Dame University Bangladesh President Rev. Patrick Gaffney, C.S.C., visited culturally significant sites, met with local faith leaders and even learned about Omani cuisine.

“Every activity we did in Oman — from swimming and hiking to touring the Grand Mosque and the College of Shari’a — was well worth the time,” said sophomore Annie Foley from Wilmette, Illinois, who said the trip was one of the best experiences of her life. “Each activity allowed us to build trust and accountability among each other, which are important prerequisites for any constructive discussion. Our dialogue sessions were all the more meaningful because we had already established a baseline of respect among one another in these activities.”

As the course continued, the group remained dialed into what was happening in the States, and particularly on campus.

“We went, things were fine and around mid-week we started getting messages from Notre Dame about how classes would be canceled after spring break,” Mirza said. “Students’ anxieties rose and we wanted to make sure we were taking care of them physically and psychologically. Then the students were asking if they’d be able to go back to campus to get their things or if they should just fly home from O’Hare, where we were going to land.”

After confirmation from the Notre Dame International team that students would be allowed to briefly enter their dorms to pick up all essential items, the question remained:  Where would they stay until they could rebook flights home? Mirza quickly phoned his wife to ask what she thought of hosting the students at their off-campus inn. An interfaith group had been staying there that week, but they were preparing to depart.

“I told them that anyone who needed to stay could stay and five of the students took us up on our offer,” he said.

All eight of the students came for dinner at the inn, which was a sort of continuation of the Oman trip, Mirza said. As students worked to change their travel plans, the group started talking about all the events that would be canceled due to the outbreak of coronavirus. Commencement was at the top of senior Elizabeth Boyle’s mind. She feared she wouldn’t get the chance to walk in her cap and gown.

With a few musicians on hand — including Mirza on harmonica and a student on ukulele — the group conducted what they dubbed a “faux-mencement,” playing Pomp and Circumstance for Boyle and giving speeches. Notre Dame ultimately decided to do an online commencement this year in light of the coronavirus outbreak, so the “faux-mencement” was, indeed, Boyle’s only chance to have a ceremony near campus this year. Notre Dame President Rev. John I. Jenkins, C.S.C., invited 2020 graduates to celebrate on campus next spring.

“It was just so sweet,” said Boyle, a native of Manhasset, NY who plans to pursue a career in religious dialogue and peacebuilding. “We were all smiling and laughing and it just made everything that was going on less scary. It was something special that I’m going to hold with me for a long time.”

The time at the Mirza’s inn was memorable for Foley, too. She saw it as a chance to debrief on all they had learned during their time in Oman.

“They were incredibly generous in welcoming our group to their inn for one last gathering before we all departed ways,” Foley said. “It was really special to have a place to celebrate the trip and all the wonderful experiences we shared.”

Originally published by Colleen Sharkey at news.nd.edu on April 01, 2020.