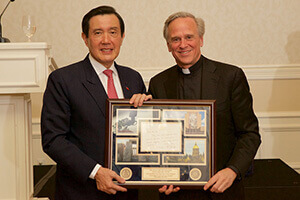 Ma Ying-jeou, former president of Taiwan, spent last weekend at the University of Notre Dame at the invitation of Notre Dame president Rev. John I. Jenkins, C.S.C. The occasion was Notre Dame’s Asia Leadership Forum, sponsored by the Liu Institute for Asia and Asian Studies.

In his keynote address, Ma highlighted greater China’s history and described his role in Taiwan’s recent progress toward “peaceful, friendly and close” relations with mainland China, Japan and the U.S.

Ma’s tenure as the 12th president of Taiwan was marked by his commitment to easing tensions and improving cross-strait relations. During his eight years in office, he secured 23 substantive agreements — in trade, energy, the environment, education and other areas — with his mainland counterparts. In 2015, at his historic and unprecedented meeting with Chinese president Xi Jinping, he became the first-ever Taiwanese leader to meet with a leader from mainland China.

A highlight of the Asia Forum weekend was a gathering, at Ma’s request, with more than 50 Notre Dame students — primarily from mainland China as well as some from Taiwan and some non-Asian students who have studied and are proficient in Chinese. 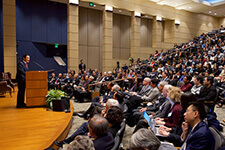 Michel Hockx, professor of Chinese literature and director of the Liu Institute, noted the high level of courtesy and intellectual curiosity of the students who engaged with each other and with Ma — a kind of cross-straits student interaction that Hockx said would be highly unusual at many institutions.

“The Asia Leadership Forum is designed to explore and showcase the values of leadership we want to instill in our students and to immerse future leaders in deep knowledge and understanding of Asia,” Hockx said. “Mr. Ma’s visit and enthusiastic interaction with students and faculty have moved the whole university toward that goal.”