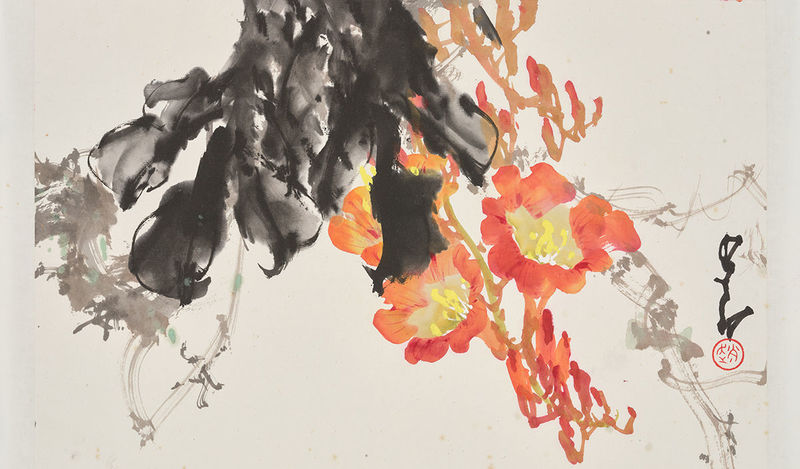 Chao Shao-an (趙少昂, 1905-1998) lived a momentous life vividly expressed through brush and ink over a nearly eighty-year career as an artist. A student-turned-instructor of China’s renowned Lingnan School, Chao traveled around the world for solo and group exhibitions across Asia, Europe, and the United States.

In partnership with the Snite Museum of Art, the Liu Institute for Asia and Asian Studies is honored to present an intimate exhibition of seventeen works from the collection of Chao Shao-an’s family in Hong Kong. The pieces feature detailed yet poetic images of the natural world for which the artist developed an international reputation. These album leaf paintings highlight Chao’s remarkable ability to capture the essence of subtle moments in nature through vibrant brushwork and coloration.

In celebration, the Liu Institute will host a curator’s lecture, painting demonstration, and reception on February 6 at the Snite Museum. Curator Fletcher Coleman, a visiting professor at the University of Notre Dame’s Department of Art, Art History and Design, will deliver the keynote address at 5:30 p.m. in the Annenberg Auditorium. KY Chiu, Chao’s grandson and a 1989 Notre Dame graduate, will share remarks about his grandfather’s work and legacy. At 6:30 p.m., Andy Chan, a disciple of Chao, will demonstrate the Lingnan School style of painting during a reception in the Snite Atrium. The event is free and open to the public.

Chao Shao-an came of age in the southern Chinese province of Guangzhou in the early years following the collapse of China’s last imperial dynasty. During this period of rapid change, Chao began his first apprenticeship in ink painting under one of the three masters of the Lingnan School of painting -- famous for creatively blending international painting methods and materials onto a foundation of traditional Chinese technique. Chao took over responsibility for the Lingnan School and began his career as an award-winning artist that brought recognition to the Lingnan style across the globe.

Through the unrest of the Japanese occupation of China during World War II and the subsequent civil war, Chao developed a style that emphasized the traditional category of bird-and-flower painting and the close study of nature. From the 1930s-1960s, Chao traveled for solo and group exhibitions across Asia, Europe, and the United States. During that time, he settled permanently in Hong Kong in 1948 and established the Lingnan Art Studio in his residence. There, he mentored generations of students in the Lingnan method and ensured its place as one of the most influential styles of twentieth century Chinese ink painting.

“This exhibition is important not only because it shows the mastery of Chao Shao-an, but also because it underscores an internationally significant contribution of someone from Asia to the art world,” says Michel Hockx, director of the Liu Institute. “It is the mission of the Liu Institute to challenge Western-centric focus in all areas, including art. By sharing his grandfather’s work, Notre Dame alumnus KY Chiu is enriching understanding of Asia in the Notre Dame community and beyond.”

“In a remarkable continuation of Chao’s international legacy, two generations of his descendants have attended the University of Notre Dame and have made this distinguished exhibition a possibility,” offers Snite Director Joseph Antenucci Becherer.