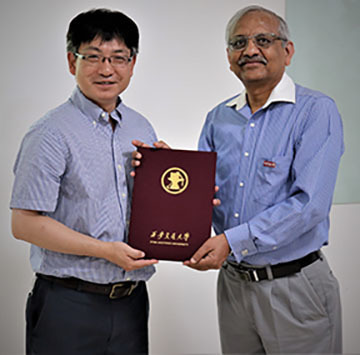 Professor. Umesh Garg has been appointed as a Guest Professor at Xi’an Jiaotong University in China. The certificate of appointment was presented to Prof. Garg at a special ceremony at XJTU in July 2019.

Xi’an Jiaotong University is one of the national TOP-9 universities under the direct jurisdiction of the State Education Ministry of China. The university was founded in Shanghai in 1896. In 1956, main part of the university was moved to Xi’an, and renamed Xi’an Jiaotong University (XJTU). As one of the first batch universities in China, XJTU was supported by the central government in the seventh and eighth five-year plans, as well as China’s “Project 211” and “Project 985” to develop into a world-class university. Now, XJTU is on the List of World-class Universities and First-class Disciplines released in 2017 by the Ministry of Education of China.

The Guest Professor is one of the highest honors at Xi’an Jiaotong University and is bestowed by the President of XJTU on academics of very high international repute who have significant connections with the University. “Prof. Garg highly deserves to receive this award since he has greatly promoted and made significant contribution to collaboration between the School of Science at XJTU and the University of Notre Dame, in particular via the REU program, since 2013” said Prof. Fuli Li, the former Dean of School of Science at XJTU.

Professor Garg continues to support and establish the students’ exchange programs between two universities. “He introduced the Research Experience for Undergraduate Students (REU) program to our Talent Students training program, which has been of tremendous benefit to our students, providing a brilliant academic start for those students,” says Prof. Hong Gao, the current Dean of School of Science at XJTU. So far, more than 20 students from XJTU have participated in REU program, and the students’ performance has been highly commended.

“It is a great honor for me to be recognized by one of the leading universities in China, especially considering our mutual interest in Nuclear Physics and student training,” Prof. Garg said while receiving the award.

Originally published by Shelly Goethals at physics.nd.edu on August 22, 2019.