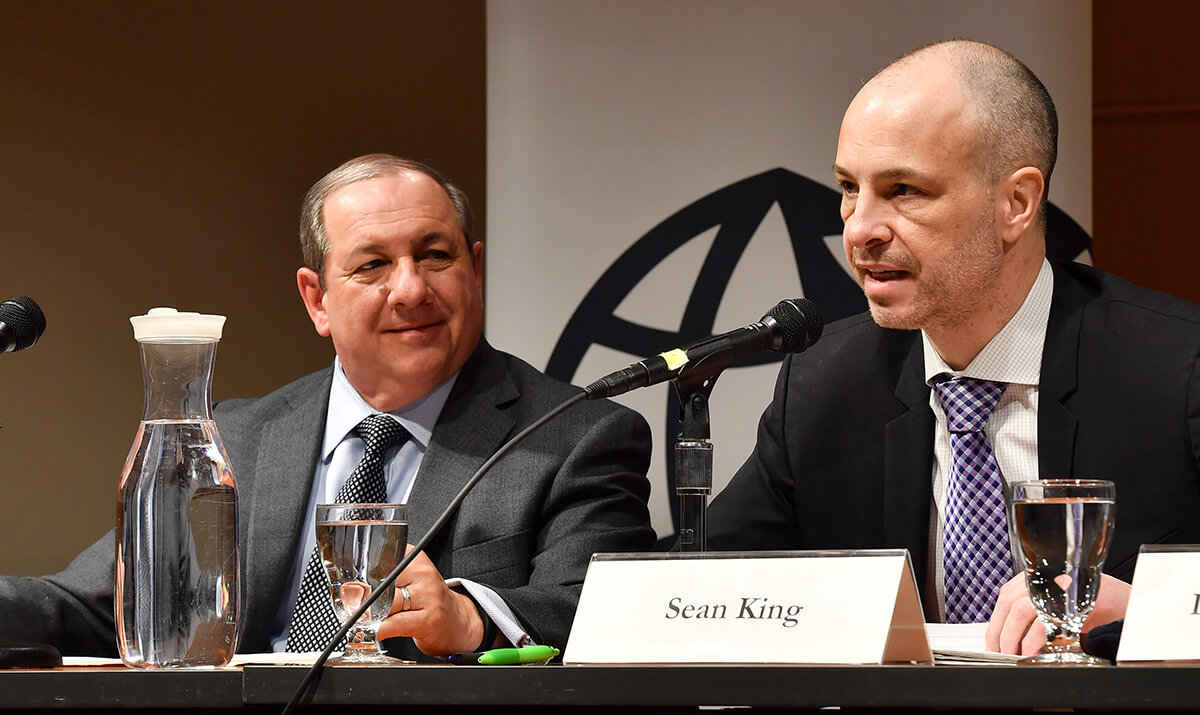 On the same day President Donald Trump met with North Korean leadership and Kim Jong-Un at a summit in Vietnam, Sean King, an East Asia expert, and George Lopez, Rev. Theodore M. Hesburgh, C.S.C., professor emeritus of peace studies, held an open discussion on the subject of U.S. and North Korea relations at the Hesburgh Center for International Studies.

Patrick Deegan, director of undergraduate studies for the Liu Institute for Asia & Asian Studies, facilitated the talk, which was also available via live stream.

The talk began with opening remarks from King and Lopez on their thoughts about the Hanoi summit, the second public meeting between Trump and Kim Jong-Un after the two world leaders met for a summit in Singapore in June of 2018.

“I think he wants to be the president who can say he ended the Korean War,” King said.

King and Lopez fielded questions from those in attendance revolving around the history of the Korean War, North Korea’s efforts with nuclear weapons, fact-checking the president and their outlook on both summits.

“By leaving [the Trans-Pacific Partnership], Trump weakened U.S. influence in Asia at the expense of strengthening mainland China,” Lopez said.

“Suspending military exercises in South Korea for eight months, it makes people question the U.S. and its alliances in Asia,” he said. “Kim Jong-Un can taste that.”

When asked about the potential consequences of President Trump pulling American Troops from South Korea, King said “it would open the door for China to expand.”

Talking points on the U.S. and North Korean relations revolved around President Trump and his dealings with North Korean leadership.

King said he categorizes his outlook as “openly pessimistic,” after telling Bloomberg in April that he was “cautiously pessimistic.”

Lopez said Trump’s shortcomings in appointing strong ambassadors may have played a role in the current administration’s struggles in international relations.

“[It’s a] lax attitude with appointing ambassadors to major allies,” he said. “[We’re] weak in that regard.”

While most of the discussion revolved around relations between the U.S. and North Korea, the event also touched upon the geopolitical context of East Asia. King said he had little confidence in Trump’s ability to hold out against mounting economic pressure from China.

“Trump will choke on the trade battle with mainland China,” he said.

King and Lopez attempted to clarify the goal of this most recent meeting between Trump and Kim Jong-Un. Lopez said the summit ultimately has shallow aims.

“It’s been made aware a number of issues were not on the table for discussion,” Lopez said. “This is not a negotiation, not a summit in the traditional sense. It’s a photo opportunity. There was simply not enough done by advance teams to anticipate nuclear or military resolutions.”

King said the Trump administration may broach the topics of a peace declaration and relief from targeted sanctions against North Korea, but he does not believe it is currently possible to achieve true peace on the Korean Peninsula.

“The conditions for peace do not exist,” King said.

Instead, King said an agreement of mutual non-aggression is more likely. Still, King said efforts for any sort of peace-related treaty may end up being “a slippery slope” and a “North Korean trap.”