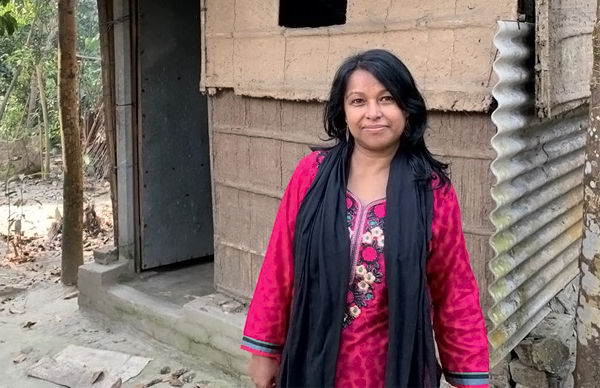 Bina D’Costa, M.A. 1997, has been selected to receive the Kroc Institute’s 2020 Distinguished Alumni Award. D’Costa is professor of international relations and peace and conflict studies specialist at the Australian National University and engaged in humanitarian peacebuilding efforts around the world. Her research and practice focuses on the intersections between politics, human rights, and security in Asia, with particular emphases on gender justice and global migration.

Each year, the Distinguished Alumni Award honors Notre Dame graduates in peace studies whose careers and lives exemplify the ideals of international peacebuilding.

Regarding D’Costa’s selection for the 2020 award, Anne Hayner, associate director for alumni relations at the Kroc Institute, wrote, “The selection committee was impressed by Bina’s commitment to engaged research, teaching, and policy advocacy in pursuit of the goals of justice and peacebuilding. Her courage and creativity in tackling the interrelated issues of migration, human rights, political violence, transitional justice, environment and gender live out the model of the scholar-practitioner peacebuilder.”

D’Costa is excited to return to Notre Dame, a place where she says she “learned who I was and how I wanted to work at peacebuilding.”

“The Kroc Institute is where I really learned what it meant to not only study peace, but to practice peacebuilding through our everyday discussions,” she says. “Globally we can see deeply authoritarian regimes developing from the U.S., to Latin America, and in many parts of Asia, including my home country, Bangladesh. At this time, it’s incredibly important that we return to some of those discussions and teachings on peacebuilding from Notre Dame and bring them into conversation in many different disciplines.”

D’Costa’s current and past research topics include peacebuilding, justice and war crimes trials; human security and borders; gender, security and conflict; children and war; and the role of non-governmental organizations (NGOs) in social movements. She has undertaken extensive field research on children’s rights and the impact of violent conflict on “war babies,” focusing especially on children born during the 1971 War of Liberation in Bangladesh and children born during the partition of India.  Based on field research and primary data that included 4,000 interviews carried out over a period of nine years in Afghanistan, Bangladesh (the Chittagong Hill Tracts), Burma/Myanmar, India (Kashmir, Ladakh), Pakistan (KPK, Balochistan, Sindh), Nepal, and Sri Lanka, D’Costa has published a co-authored book with John Braithwaite entitled, Cascades of Violence: War, Crimes and Peacebuilding in South Asia (2018). This is one of the most extensive and in-depth studies ever carried out in the region.

In addition to research, D’Costa is also involved in policy-oriented work, especially related to questions of human security, borders, and global migration. She has provided input on two global compacts on migration and refugees. She focuses on advocating for human rights and just policies for refugees, internally displaced persons and stateless people throughout South Asia, and has worked with indigenous groups in the Chittagong Hill Tracts (CHT) in Northeast India and alongside Rohingya, Tamil and Afghan refugee networks.

As a United Nations staff member, D’Costa has worked in regions including East Africa, the Horn of Africa, Europe and Asia-Pacific. She has also served on three global emergency response teams for the United Nations Children’s Fund (UNICEF) in Europe, the Horn of Africa and, most recently, as a member of the Rohingya Emergency Response Team working on strategies to support displaced persons during the crisis in Burma.

D’Costa is a member of the CHT Commission, a human rights body for indigenous groups in the CHT, Bangladesh, and the United Nations Development Programme Gender, Crisis Prevention, and Recovery expert panel. She is also part of the Advisory Council for the International Center for Gender, Peace, and Security.

She is the author of several books, including Nationbuilding, Gender and War Crimes in South Asia (Routledge, 2011 & 2013); Children and the Global Politics of Conflict (co-authored with Kim Huynh and Katrina Lee Koo, Cambridge University Press); and Children and Violence: Politics of Conflict in South Asia (edited by Bina D’Costa, Cambridge University Press 2015). Her forthcoming book will focus on political violence and human rights movements in South Asia.

About the Kroc Institute

Notre Dame’s Kroc Institute, part of the Keough School of Global Affairs, is one of the world’s principal centers for the study of the causes of violent conflict and strategies for sustainable peace. The Kroc Institute offers undergraduate and Ph.D. degrees in peace studies and supports the International Peace Studies concentration of the Keough School’s Master Of Global Affairs. The IPS concentration builds on the Institute’s former Master’s in International Peace Studies.