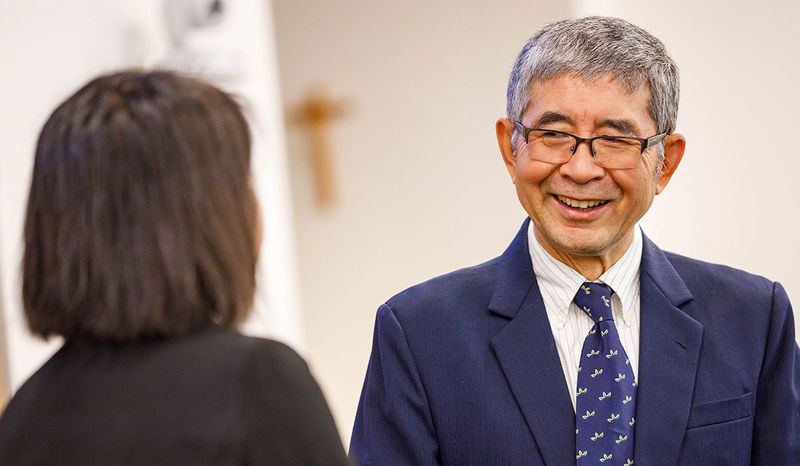 The plan for Liangyan Ge’s life was uncomplicated: He would follow in the footsteps of his father to become a doctor.

It was what Ge wanted as a boy, growing up in the Anhui province of China in the 1960s. It was what his parents—both medical professionals—assumed. And as Ge performed brilliantly in his studies, the dream seemed perfectly attainable.

“My father was known for taking care of so many people who were poor,” Ge recalled. “He was kind and meticulous and scrupulous. Even years after his death, people would worship him almost like a deity on our memorial day.”

Ge hoped for the same life of service. But at age 13 and just out of middle school, he learned that a medical career would never be within reach.

The policies of Chinese leader Mao Zedong’s Cultural Revolution would throw his life off course for years, precluding him from not only becoming a doctor, but even from attending high school. “There was no way for me to become a medical student without studying chemistry and physics in high school. It was hard to accept that reality.”

Though Ge never achieved his first dream, he made the most of every unlikely opportunity to create a second dream that would see him delivered from a yearslong factory job, propelled through a master’s and doctoral program, invited to the United States as a scholar, and ultimately recruited by the University of Notre Dame for an incredible 25-year career as a Chinese language and literature professor that ends with his retirement this semester.

Reflecting back on a life that seems unbelievable, Ge said simply, “My life has been full of unexpected things.”

THE END OF A DREAM

The Cultural Revolution began in 1966 with the goal of eliminating traces of capitalism and traditionalism from Chinese society.

Two policies directly affected Ge as a boy: a requirement for city youths to learn about agriculture by spending years in the countryside, thereby eliminating opportunities to attend high school, and the shutdown of access to university opportunities to almost everyone. Instead, higher education was offered only to families who were recommended by the local government and accepted by the communist party.

“My family was seen as suspicious,” Ge recounted. “We were not trusted because my parents served as medical officers in the Nationalist Army.”

So, just after Ge finished middle school, he and his second-oldest sister were sent away to a farm near their city for two years.

Afterward, he was sent to work in a factory as a machine operator on planing and milling equipment to produce gears. He spent seven years in the factory and never thought he would leave.

“The best years of my life were taken away,” he said.

HOPE FROM A LOUDSPEAKER

Things began to change when Mao died in 1976 and Deng Xiaoping came to power. Upon leaving work one day in 1977, Ge heard blaring news from a street speaker that would change his life: The government was reinstating open entrance exams to colleges and universities.

“I went to the library and got textbook after textbook to prepare for the test,” he said: Chinese history, history of the Communist Party, geography, math, composition.

“I wasn’t expecting to go for a PhD. I just wanted to get out of the factory.”

But it was his excellence in English language that earned him a spot in university at age 24. He had learned English in middle school and the English-language radio broadcasts that he listened to each night—the same ones that could have landed his family in trouble with authorities—ultimately landed him a spot in the English language program at Hefei Polytechnic University, known for its engineering program.

He had originally thought he would become a Chinese language and literature scholar, but was elated to be placed on the English language program. “I wasn’t expecting to go for a PhD. I just wanted to get out of the factory,” he said.

He excelled at his undergraduate studies and did well in a test that allowed him to pursue a master’s degree in British literature at the prestigious Nanjing University.

His adviser suggested that he study Jonathan Swift and question characterizations of Swift as a misanthrope as well as examining of irony in Swift’s writings such as Gulliver’s Travels. “I still love Swift,” Ge said. “He was a fascinating writer.”

And, like the adventurer Lemuel Gulliver, Ge would find himself undergoing unexpected travels to faraway places.

Ge was pursued by several universities and colleges, but ultimately chose to come to Notre Dame in 1995 as an assistant professor of Chinese language and literature.As a junior faculty member at Nanjing University after he received his master’s, Ge was encouraged to apply to American universities. He accepted the first offer he received—to a comparative literature program at Indiana University.

The rigorous training in Western literary theories, especially on fictional narrative, opened a new world for Ge and provided new perspectives for him to reexamine the Chinese traditional fiction. His doctoral dissertation was on Shuihu zhuan, or Outlaws of the Marsh, China’s earliest full-length work in the vernacular. 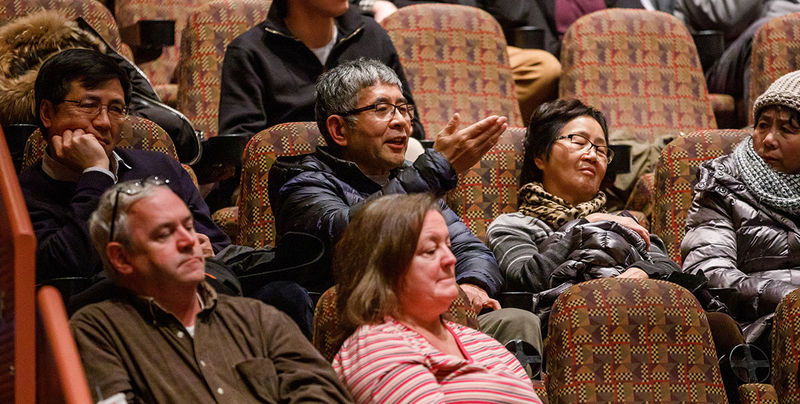 Ge enthusiastically engages with panelists during a discussion of the film "Crazy Rich Asians" in November 2018.
Also shown in his row, from left, are Yongping Zhu, chair of the Department of East Asian Languages and Cultures,
Ge's wife, Yongqing Pan, and Zhu's wife, Jinxiu.

Though his formal studies had focused on literature, Ge excelled as a language teacher. In fact, two years after arriving at Notre Dame, he coauthored the textbook Integrated Chinese Level I, which is still used in about 60 percent of college-level Chinese language programs in the United States.

“We didn’t expect the book to become this big,” he said. “We didn’t even try to sell it. A publisher knocked on our door at the right time. But when we wrote the book, we were careful to get rid of anything that wasn’t useful.”

“Notre Dame has played a tremendous role in my intellectual and professional development."

Ge went on to write two other monographs that, along with journal publications and presentations over the years, helped establish him as an internationally recognized scholar of Chinese literature. He became a full professor in 2015.

Just as important has been his dedication to his students and the joy he felt in the classroom. “I feel rejuvenated to be with young people,” he said. “It does feel funny that the audience remains young while you get older, but I have cherished my time in the classroom.”

And he has cherished his time at Notre Dame.

“I love Notre Dame,” he said. “Notre Dame has played a tremendous role in my intellectual and professional development. I’m among very few people who have spent their entire career in one place. I had opportunities to go other places, but I didn’t want to go because I am happy here. I am privileged to have a position at Notre Dame.”

It was not Ge’s choice to retire at this point in his career. He is only 66 years, and would have liked his career to have extended at least five more years. 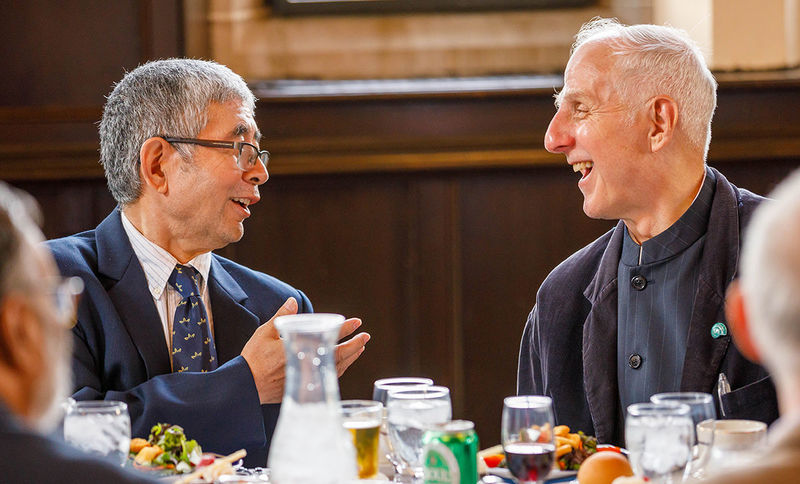 Ge speaks with Victor Mair, professor of Chinese language and literature at the University of Pennsylvania,
during the symposium in September 2019.

But in 2012, after experiencing slight tremors in his left hand, he was diagnosed with Parkinson’s disease.It was not Ge’s choice to retire at this point in his career. He is only 66 years, and would have liked his career to have extended at least five more years.

To pay respects to Ge and his academic achievements, the Department of East Asian Languages and Cultures, the Liu Institute for Asia and Asian Studies, and the Institute for Scholarship in the Liberal Arts hosted an international symposium on September 7 in his honor: "Chinese Vernacular Literature Revisited: An International Symposium in Honor of Liangyan Ge." Top international scholars of Chinese vernacular literature cleared their calendars to celebrate Ge.

“The invited scholars managed to squeeze time in their busy schedule to come, and I can’t say enough how grateful I am to everybody,” he said.

Now, with his last course finished and last semester complete, Ge will adjust to change as he has done so many other times in his life.

He and his wife of 37 years, Yongqing Pan, are moving to San Diego to benefit from milder weather.

“Retirement is like the exhale, and I’m doing just that.”

This means ending a nearly 25-year tradition of playing ping pong and trash talking with his colleague Xiaoshan Yang, who also teaches Chinese language and literature. The two would meet every Saturday in Ge’s basement.

“In early years we were equals, but gradually my skills are getting worse. But he’s not as good a player as he was, either,” Ge said, laughing. “And our trash talking is not at the volume it was before. But this tradition has meant a lot to me.”

He and Pan are looking forward to spending more time with their daughter, Sherry Ge ’06, and son-in-law, Vijay Ramanan ’06, and their two small children. Interestingly, Sherry and Ramanan work in medicine, the field Ge had dreamed of entering. Both work for the Mayo Clinic in Minnesota: Sherry is a nurse practitioner and Ramanan is a neurologist.

Overall, Ge is prepared to enter the newest phase of his life. “To keep the life of a human being, you have to breathe,” he said. “And there are two important parts of breathing—to inhale and exhale. Those two things are mutually dependent on each other, mutually indispensable.

“Retirement is like the exhale, and I’m doing just that.”