"Why India's Farmers are Angry with the Narendra Modi Government": A Lecture by Paranjoy Guha Thakurta 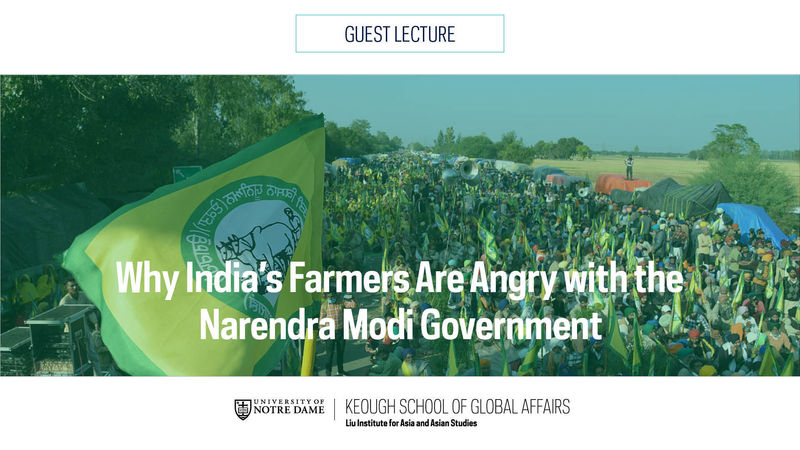 Since late November, hundreds of thousands of farmers in India—many of them from the northern states of Punjab, Haryana, Rajasthan and Uttar Pradesh—have been protesting on the outskirts of New Delhi. They are demanding the repeal of three laws enacted by Parliament that would eliminate current government protections and allow large companies to drive down prices. Despite eleven rounds of talks, representatives of Prime Minister Modi’s government have not agreed to the demands of the protesting farmers. The government has consented to postpone the implementation of the laws by a year and half, but the farmers (represented by more than 40 organizations and unions) have not agreed. Government spokespersons have alleged that the farmers are being misled by separatists and left-wing extremists, but the farmers argue that their struggle is for a better livelihood and a more secure future. The agitation by farmers is arguably the biggest challenge faced by the Modi government since it came to power in 2014.

Paranjoy Guha Thakurta is an author, publisher and educator whose four decades of experience involves print, radio, television and documentary cinema. Publications include Media Ethics (Oxford University Press), and The Real Face of Facebook in India and former editor of Economic and Political Weekly. His main areas of interest are the workings of the political economy and the media in India and the world, and he has written books and directed and produced documentary films on these topics.