Lecture: Tarini Bedi, "Automobility, Roads, and the Making of Kin in Mumbai” 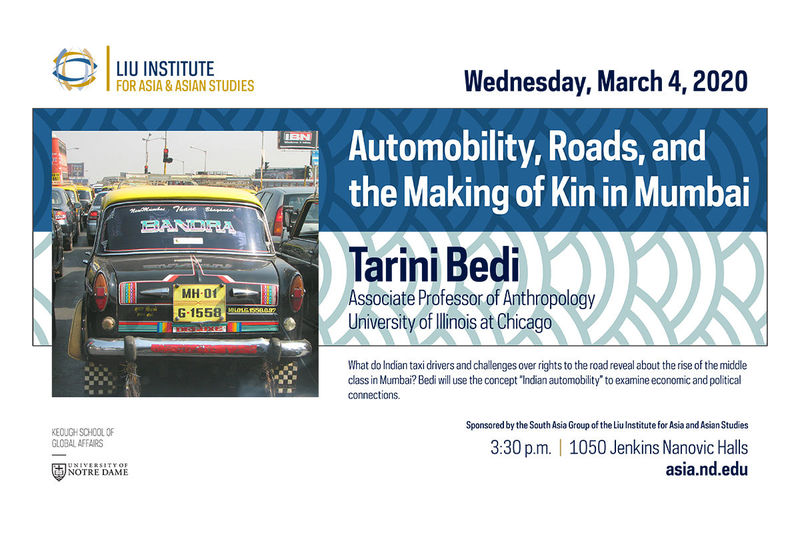 This talk provides some perspective on what I call Indian automobility. Most understandings of automobility remain tied to Western assumptions, patterns of driving, (sub) urbanization, and engagements with the road. However, given expanding automobilization in the global South, I reflect here on automobility and roads from a place and working- class, labor force of drivers who have long been embedded in this expansion—taxi drivers. Most discussions over driving and automobiles tie the proliferation of automobility to the rise of the middle class, consumption, and to the production of middle class subjectivity. Global automobile companies are aggressively trying to capture new consumers and their aspirations for (auto) mobility in countries like India and China at the same time that much of the Western world is experimenting with alternative forms of mobility. While questions of automobility and class consumption are no doubt, important, in India, a very large number of those who drive and use the roads are people (overwhelmingly men), who drive as a form of labor and work—drivers who drive other people and things around on what emerges as something that might be called a road. Rather than simply accept that automobility in India produces worlds and spatial politics that mirror those where the automobile was invented, instead I try to understand these worlds through the conflicting demands of what I call “rights to the road” in Mumbai.  I look at this Indian automobility and the auto-spatial politics that it produces through the lens of the 20th and 21st century taxi trade in Bombay/Mumbai. I attune to the Bombay taxi as a vehicle in all its forms -- a thing driven, an economic and political connection, a site of sociality and kinship, a way of understanding the urban state, a lever of politics, and finally and most importantly a contest over rights to the urban road.

Tarini Bedi is an urban anthropologist who conducts research in South and Southeast Asia. She is Associate Professor of sociocultural anthropology in the Department of Anthropology at the University of Illinois at Chicago. Her research and teaching interests lie at the intersection of urban and political anthropology, anthropology of infrastructure and mobilities, cultural geography, and gender studies. Her first book, The Dashing Ladies of Shiv Sena: Political Matronage in Urbanizing India (2016, SUNY Press) develops a feminist theory of brokerage politics. It is particularly interested in the expressive, masculinized, and visual forms of politics utilized by low- level women politicians in Western India. Her second book, (Auto) Biographies and (Auto) Mobilities: Roads, Labor and Kinship in Mumbai’s Taxi Trade is under contract and forthcoming with the University of Washington Press. This book looks at the social, material, political, labor, and manufacturing histories of road transport, motoring, and automobility through the lens of the taxi trade in Bombay/Mumbai.