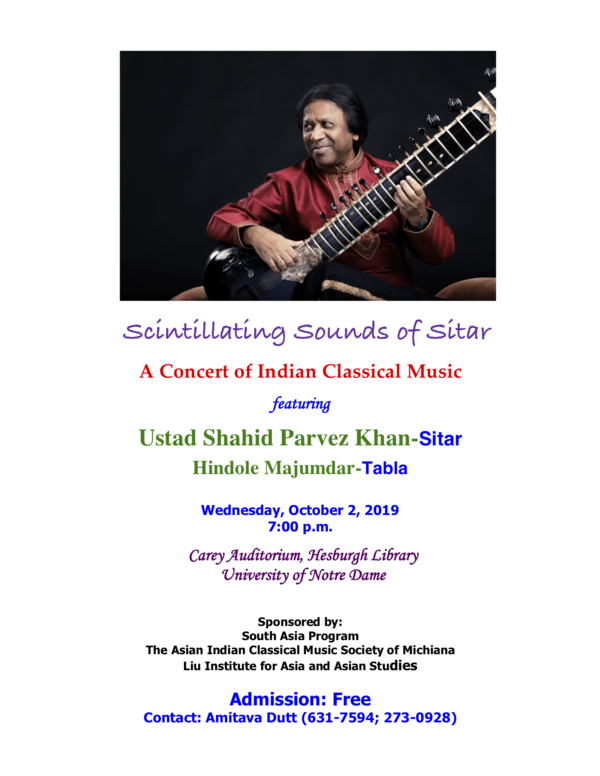 Ustad Shahid Parvez Khan is a sitar maestro of global acclaim and is regarded as one of the finest Indian Classical musicians alive. He is one of the most brilliant musical gems of the famous Etawah or Imdadkhani Gharana (tradition) and belongs to the seventh generation of this musical lineage.  He has trained with Ustad Aziz Khan, his father, and the renowned sitar maestro, Ustad Vilayat Khan. The recipient of numerous prestigious awards including the Government of India’s Padma Shri and the Sangeet Natak Academy Award, he maintains a rigorous tour schedule and continuously enthralls audiences across the globe. For more information, see: http://www.shahidparvezkhan.com/

Hindole Majumdar already occupies a commendable position among the young tabla players of his generation. He received his training from Shibsankar Karmakar, a disciple of the late Ustad Karamatullah Khan, and from Pandit Sankha Chatterjee. A graded artist of All India Radio and Doordarshan, he has won numerous awards, including the first prize at several All Bengal tabla solo competitions.

We are grateful to the Asian Indian Classical Music Society (AICMS) benefactors and members, the University of Notre Dame, the Liu Institute of Asia and Asian Studies, and the Center for Social Concerns, for making these concerts possible.