Things to Do with Women's Magazines 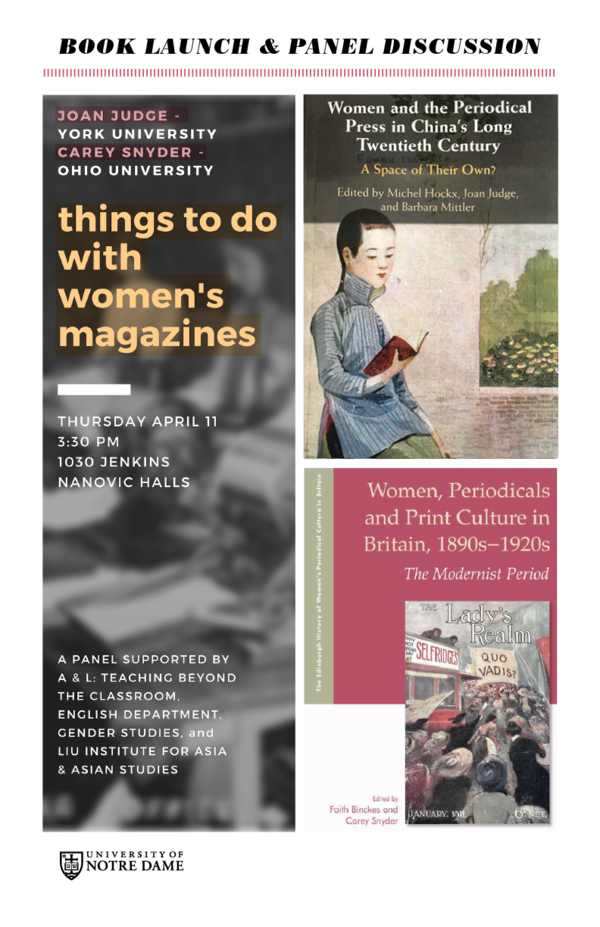 This event brings to our campus two prominent scholars of women’s magazines from the early twentieth century. They will present new methods and processes for studying women’s magazines in a global context through juxtapositions of British and Chinese examples.

Joan Judge is Professor of History at York University. She is the author of Print and Politics: ‘Shibao’ and the Culture of Reform in Late Qing China (Stanford, 1996), The Precious Raft of History: The Past, the West, and the Woman Question in China (Stanford, 2008), and Republican Lens: Gender, Visuality, and Experience in the Early Chinese Periodical Press (University of California Press, 2015). She is also the co-editor of Women and the Periodical Press in China's Long Twentieth Century (Cambridge, 2018).

Carey Snyder is Associate Professor of English at Ohio University. She is the author of British Fiction and Cross-Cultural Encounters: Ethnographic Modernism from Wells to Woolf (Palgrave, 2008), numerous articles on modern British women’s journalism, and is co-editor of the forthcoming Women, Periodicals and Print Culture in Britain, 1890s-1920s: The Modernist Period (Edinburgh University Press).

Joining the discussion will be Notre Dame professors Barbara J. Green (English, Gender Studies) and Michel Hockx (East Asian Languages and Cultures). Both do research in the field of periodical studies and have written and taught about women’s magazines in Britain and China.

This event is co-sponsored by the Department of English, the Gender Studies Program, and the Liu Institute for Asia and Asian Studies.