Lecture by Rohit De, A People's Constitution: The Everyday Life of Law in the Indian Republic 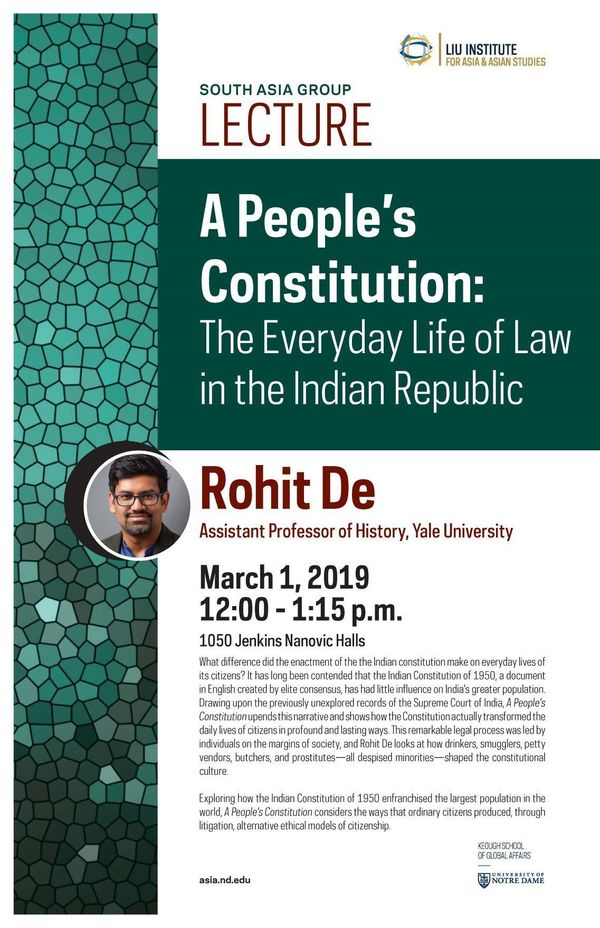 What difference did the enactment of the the Indian constitution make on everyday lives of its citizens? It has long been contended that the Indian Constitution of 1950, a document in English created by elite consensus, has had little influence on India’s greater population. Drawing upon the previously unexplored records of the Supreme Court of India, A People’s Constitution upends this narrative and shows how the Constitution actually transformed the daily lives of citizens in profound and lasting ways. This remarkable legal process was led by individuals on the margins of society, and Rohit De looks at how drinkers, smugglers, petty vendors, butchers, and prostitutes—all despised minorities—shaped the constitutional culture.

Exploring how the Indian Constitution of 1950 enfranchised the largest population in the world, A People’s Constitution considers the ways that ordinary citizens produced, through litigation, alternative ethical models of citizenship.

Rohit De is lawyer and an Assistant Professor of History at Yale University.  Prior to Yale, he was a Mellon Research Fellow at the Centre for History and Economics at the University of Cambridge. He has worked with Chief Justice K.G Balakrishnan of the Supreme Court of India and worked on constitutional reform projects in Sri Lanka and Nepal. He is currently working on a history of civil liberties arising out of Asia and Africa post WW2 and mediated through Indian diasporic lawyers.

This lecture is presented in partnership with the South Asia Group.