The Church and China in the Age of Francis: A Panel Discussion 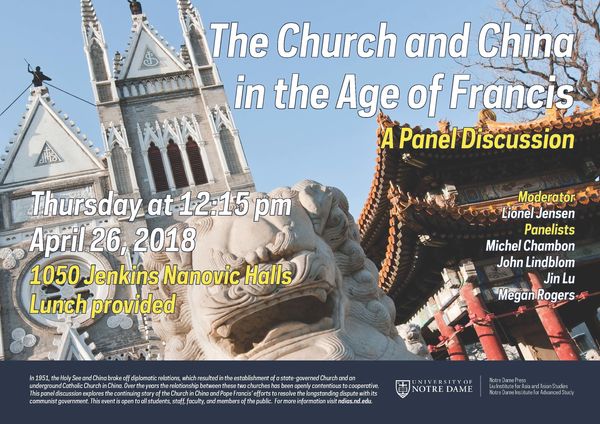 Join the Liu Institute for Asia and Asian Studies, the University of Notre Dame Press, and the Notre Dame Institute for Advanced Study for a panel discussion exploring the continuing story of the Church in China and Pope Francis' efforts to resolve the longstanding dispute with its communist government. This moderator for this event is Lionel Jensen, and the featured panelists are Michel Chambon, John Lindblom, Jin Lu, and Megan Rogers.

In 1951, the Holy See and China broke off diplomatic relations, leading to tensions and divisions within the Church there and the emergence of two communities, one “official” and subject to control by the Patriotic Association, and the other “unofficial.” Over the years the relationship between these two communities has ranged from openly contentious to cooperative. The Vatican's recent strategy for establishing diplomatic relations with Beijing raises important questions about the role of the Catholic Church in China, including the extent of state authority in Church matters, détente, charity, and convergence between the two Churches, and the fate of the millions of Catholics who identify with the underground Church.

For those interested in additional readings, our panel recommends the following readings, some of which are introductory, and some that are more specific in their approach. Citations are linked to the University of Notre Dame Hesburgh Library site where possible.