Lecture by Michael Puett: "Religion and politics — in China, for example" 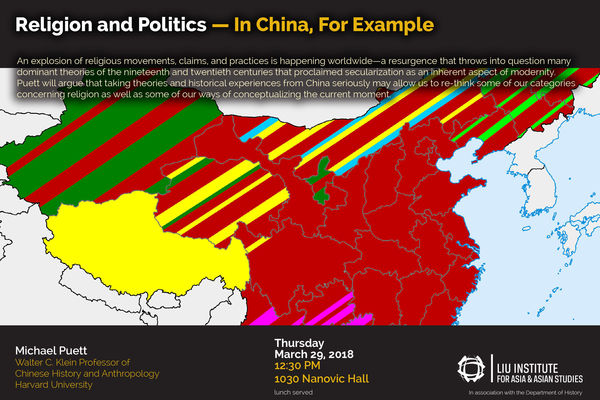 We are witnessing throughout the world an explosion of religious movements, claims, and practices – a resurgence that throws into question many of the theories so dominant in the nineteenth and twentieth centuries that proclaimed secularization as an inherent aspect of modernity.  This talk will look at the religious resurgence occurring in China, as well as historical debates in China concerning the nature of ritual and politics.  I will argue that taking theories and historical experiences from China seriously may allow us to re-think some of our categories concerning religion as well as some of our ways of conceptualizing the current moment.

Michael Puett is the Walter C. Klein Professor of Chinese History and Anthropology, as well as the Chair of the Committee on the Study of Religion, at Harvard University. His interests are focused on the inter-relations between philosophy, anthropology, history, and religion, with the hope of bringing the study of China into larger historical and comparative frameworks.

This event is free and open to the public. A light lunch will be served, while supplies last.