Lecture by Lothar von Falkenhausen: “The Problem of Human Representation in Pre-Imperial China” 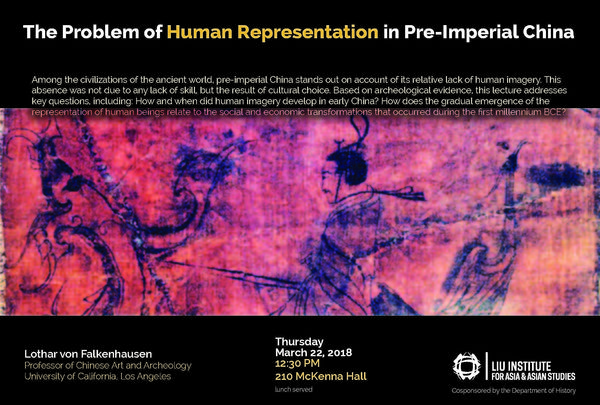 Among the civilizations of the ancient world, early China before the imperial unification in 221 BC stands out on account of its relative lack of human imagery.  This absence was certainly not due to any lack of skill on the part of early Chinese artists, but the result of cultural choice, possibly reinforced by religious taboos. How and when did human imagery develop in early China?  And how does the gradual emergence of an artistic focus on the representation of human beings relate to the social and economic transformations that occurred during the first millennium BC? This lectures will address such questions based on archaeological finds.

Lothar von Falkenhausen is Professor of Chinese Archaeology and Art History at UCLA, where he has taught since 1993; he heads the East Asian Laboratory at the Cotsen Institute of Archaeology at UCLA; he served as Associate Director of that Institute from 2004-2014. He was educated at Bonn University, Peking University, Kyoto University, and Harvard University, and received his PhD in anthropology from Harvard in 1988.  His research concerns the archaeology of the Chinese Bronze Age, focusing on large interdisciplinary and historical issues on which archaeological materials can provide significant new information.  He has published copiously on musical instruments, including a book, Suspended Music: Chime Bells in the Culture of Bronze Age China (1993); Chinese bronzes and their inscriptions; Chinese ritual; regional cultures; trans-Asiatic contacts; the history of archaeology in East Asia; and method and theory in East Asian archaeology.  His Chinese Society in the Age of Confucius (1000-250 BC): The Archaeological Evidence (2006) received the Society for American Archaeology Book Award. Falkenhausen was co-Principal Investigator of an international archaeological project on ancient salt production in the Yangzi River basin (1999-2004) and is presently serving as Instructor of Record of the International Archaeological Field School at Yangguanzhai, Xi’an (2010-).  In 2012, President Obama appointed him to the Cultural Property Advisory Committee, Department of State, where he continues to serve under the current administration. He is a Full Member of the German Archaeological Institute; a Honorary Research Fellow of the Shaanxi Archaeological Academy; a Honorary Professor of Zhejiang University; a Fellow of the American Academy of Arts and Sciences; and a Member of the American Philosophical Society.