Lecture by John Pomfret, "The Background to the Coming Crisis in US-China Relations" 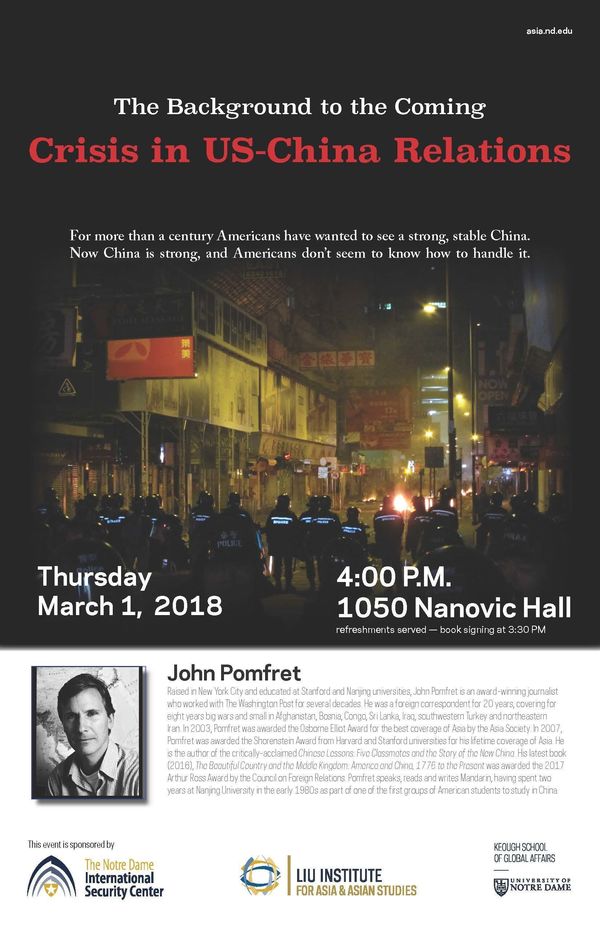 For more than a century Americans have wanted to see a strong, stable China. Now China is strong, and Americans don't seem to know how to handle it.

Raised in New York City and educated at Stanford and Nanjing universities, John Pomfret is an award-winning journalist who worked with The Washington Post for several decades.  He was a foreign correspondent for 20 years, covering for eight years big wars and small in Afghanistan, Bosnia, Congo, Sri Lanka, Iraq, southwestern Turkey and northeastern Iran. Pomfret spent seven years covering China – one in the late 1980s during the Tiananmen Square protests and then from 1997 until the end of 2003 as the bureau chief for The Washington Post in Beijing. Following that he covering U.S. relations with Asia for the Post. In 2003, Pomfret was awarded the Osborne Elliot Award for the best coverage of Asia by the Asia Society. In 2007, Pomfret was awarded the Shorenstein Award from Harvard and Stanford universities for his lifetime coverage of Asia. He is the author of the critically-acclaimed “Chinese Lessons: Five Classmates and the Story of the New China.” His latest book (2016), “The Beautiful Country and the Middle Kingdom: America and China, 1776 to the Present” was awarded the 2017 Arthur Ross Award by the Council on Foreign Relations.