Lecture by Miranda Brown, "On ‘Bad’ Chinese Food: Reflections on Sweet-and-Sour Pork and its Americanized Ilk" 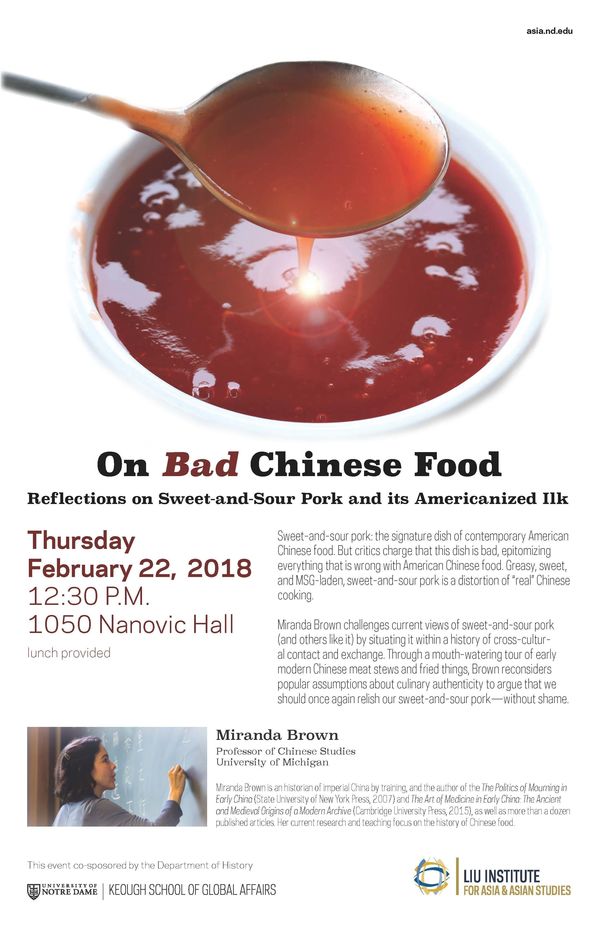 "On ‘Bad’ Chinese Food: Reflections on Sweet-and-Sour Pork and its Americanized Ilk"

Sweet-and-sour pork: the signature dish of contemporary American Chinese food. Sold in cheap diners, strip mall buffets, and P.F. Chang’s, this dish is a staple of contemporary American life. But critics charge that this dish is bad, epitomizing everything that is wrong with American Chinese food. Greasy, sweet, and MSG-laden, sweet-and-sour pork is a distortion of “real” Chinese cooking, arguably more American than Chinese. In this talk, I will challenge current views of sweet-and-sour pork (and others like it) by situating this dish within a history of cross-cultural contact and exchange. Through a mouth-watering tour of early modern Chinese meat stews and fried things, I will also reconsider popular assumptions about culinary authenticity and argue that you should once again relish your sweet-and-sour pork – without shame.

Miranda Brown is Professor of Chinese Studies in the Department of Asian Languages and Cultures at the University of Michigan. She has taught there since 2002, after receiving her PhD in History from U.C. Berkeley. A historian of imperial China by training, she is the author of the The Politics of Mourning in Early China (State University of New York Press, 2007) and The Art of Medicine in Early China: The Ancient and Medieval Origins of a Modern Archive (Cambridge University Press, 2015), as well as more than a dozen published articles. Her current research and teaching focus on the history of Chinese food.