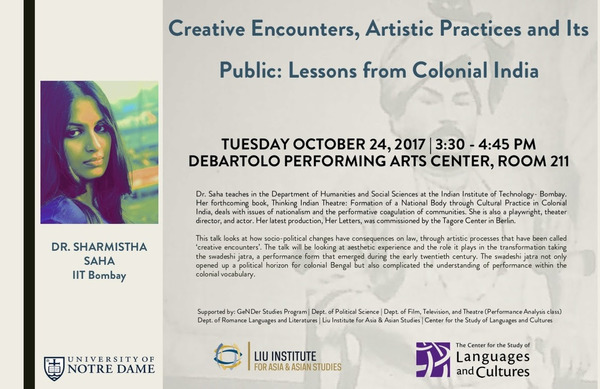 Head to DPAC on Monday October 24 for a talk by Dr. Sharmistha Saha!

Dr. Saha, Department of Humanities and Social Sciences at the Indian Institute of Technology Bombay, will present a lecture on how socio-political changes have consequences on law, through artistic processes that have been called ‘creative encounters’. She examines aesthetic experience and the role it plays in the transformation taking the swadeshi jatra, a performance form that emerged during the early twentieth century. The swadeshi jatra not only opened up a political horizon for colonial Bengal but also complicated the understanding of performance within the colonial vocabulary.

Dr. Saha's  forthcoming book, Thinking Indian Theatre: Formation of a National Body through Cultural Practice in Colonial India, deals with issues of nationalism and the performative coagulation of communities. She is a playwright, theater director, and actor. Her latest production, Her Letters, was commissioned by the Tagore Center in Berlin. She is currently the recipient of the Inlaks- Asia Art Archive 2017 fellowship for her next theater production.This talk look