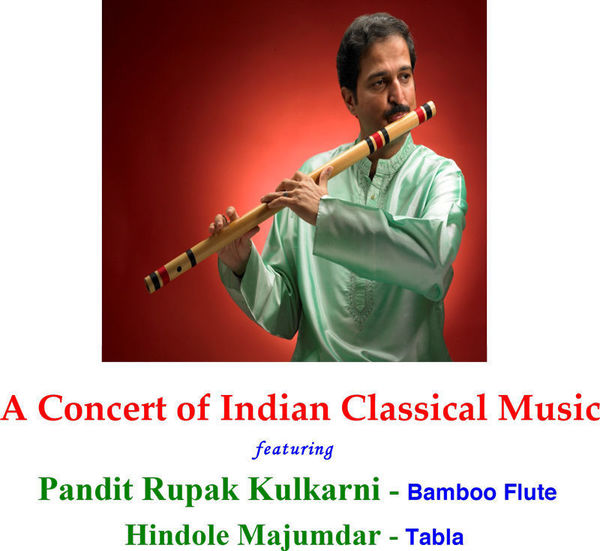 The Asian Indian Classical Music Society is pleased to present Rupak Kulkarni (Flute) with Hindole Majumdar (Tabla) in concert on September 13, 2017, Wednesday, at 6:30 P.M., in Andrews Auditorium, Geddes Hall, University of Notre Dame. This event is FREE and open to the community.

Pandit Rupak Kulkarni is the prime disciple of the legendary flute maestro Pandit Hariprasad Chaurasia, and a torch bearer of the Maihar Gharana, made famous around the world by Ustad Ali Akbar Khan and Pandit Ravi Shankar. After training with his father, the late Pt. Malhar Rao Kulkarni, he began his tutelage under Pandit Hariprasad Chaurasia at the age of 9. Rupak’s first solo flute performance was at the age of 11. Since then he has performed in numerous prestigious music conferences and concerts in India, the US, the UK, Russia, Japan and France. His performances combine elements of the earlier dhrupad and later khayal forms, and demonstrate his unique sensitivity and creativity. His recordings have been released by major music companies including Times Music, HMV, Navras, Plus Music, Rhythm House, Ninaad, ABCL’s Big B, Sense World (London), and WorldWideRecords. He performs regularly on All India Radio, World Space Radio and various TV channels such as Doordarshan, STAR TV, Zee TV, and CNN-IBN.

Hindole Majumdar already occupies a commendable position among the young tabla players of his generation. He received his training from Shibsankar Karmakar, a disciple of the late Ustad Karamatullah Khan, and from Pandit Sankha Chatterjee. A graded artist of All India Radio and Doordarshan, he has won numerous awards, including the first prize at several All Bengal tabla solo competitions.

We are grateful to the AICMS benefactors and members, the University of Notre Dame, the Liu Institute of Asia and Asian Studies, and the Center for Social Concerns, for making these concerts possible.