War, Race and Empire in the Anthropocene: Some Occluded Aspects of Climate Change 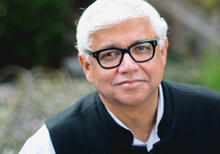 Highly acclaimed Indian novelist Amitav Ghosh will deliver the 23rd Annual Hesburgh Lecture in Ethics and Public Policy.  Ghosh’s lecture, “War, Race and Empire in the Anthropocene: Some Occluded Aspects of Climate Change”, will address how the discussion of climate change has largely been centered in Western universities—produced by scientists, engineers and economists. This has skewed the dialogue in certain directions, including conceptualizing it as an economic program, which can be dealt with through technological and technocratic fixes. Ghosh will also identify a more political approach to climate change. Yet these dominant frameworks tend to exclude many of the overarching cultural, political, geographical and historical contexts of global warming leading to the question: what other frameworks could be relevant to this subject?

Born in Kolkata (formerly Calcutta), Ghosh grew up in India, Bangladesh, and Sri Lanka. He studied in Delhi, Oxford and Alexandria and is the author, most recently, of The Great Derangement: Climate Change and the Unthinkable, a work of nonfiction. His work, which has been translated into more than 20 languages, includes The Circle of Reason, The Shadow Lines, In An Antique Land, Dancing in Cambodia, The Calcutta Chromosome, The Glass Palace, The Hungry Tide, and the first two volumes of The Ibis Trilogy; Sea of Poppies, River of Smoke, and Flood of Fire. Ghosh's essays have been published in The New Yorker, The New Republic and The New York Times, and collections of his essays have been published by Penguin India (The Imam and the Indian) and Houghton Mifflin USA (Incendiary Circumstances).

The annual Hesburgh Lecture in Ethics and Public Policy, established by the Kroc Institute for International Peace Studies in 1995, honors the late Rev. Theodore M. Hesburgh, C.S.C., president emeritus of Notre Dame, a global champion of peace and justice, and the founder of the Kroc Institute. Each year a distinguished scholar, policymaker, and/or peace advocate is invited to deliver a major lecture on an issue related to ethics and public policy in the context of peace and justice.

Co-sponsored by the Department of English and the Liu Institute for Asia and Asian Studies.