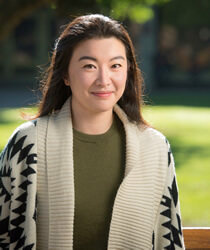 What does it mean for transnationalism to stop at some point before the fullness of transmission, influence, and convergence? In this talk, Nan Da will give a unique history of nineteenth-century Sino-American transpacificism and use it to isolate a shift in the conceptualization of literature's agency across national borders, and offer up as parables the literary forms that traffick in non-transmissive encounter.

Currently she is drawing on canonical and sub-canonical works from nineteenth-century America and China to formulate a hermeneutics of formality, and asking what might be gained if we see formality neither as meaningless social postures nor as traditional conservativisms but as ways of: having boundaries despite participating in history's unfolding or cultural sharing; deconstructing the ramifications of formalizing (or codifying) human contact; articulating the finitude of available forms of cross-cultural expression at any given moment; and excusing oneself in a quiet manner from certain kinds of empiricisms and historicisms.

The Asia Working Group series is a collaboration with the Kellogg Institute for International Studies.