Asia and the US Elections: Panel Discussion 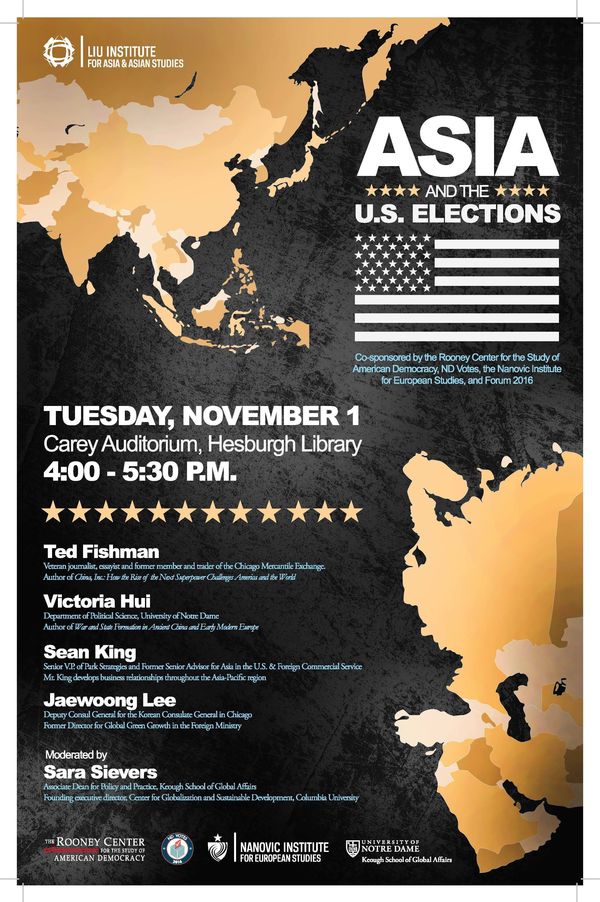 The 2016 US Presidential election is full of issues that affect our relationship with nations in Asia, including trade and security. The Trans-Pacific Partnership (TPP), China's flexing regional might, North Korea, the silent but enduring presence of Russia, the ripple effects of democratic transitions such as the Arab Spring, along with the waning idea of a national superpower, South Asia and its development, the environment and human impact—to name a few in broad strokes—add to the litany of urgent issues facing our national election.

The Liu Institute will host a conversation among Asia experts of various disciplines and specializations. Our panelists will address questions and issues related to ways that the 2016 US elections and Asia affect one another: from inter-Asian national relations, to peoples and migrations, business, health and human dignity, onward to the global implications that Asia itself has on the world—and back to everyday life in the United States.

Ted Fishman is a veteran journalist, essayist and former member and trader of the Chicago Mercantile Exchange. He is author of China, Inc.: How the Rise of the Next Superpower Challenges America and the World and Shock of Gray.

Victoria Hui is a professor in the Department of Political Science, University of Notre Dame. She is the author of numerous books and articles including War and State Formation in Ancient China and Early Modern Europe.

Sean King is a Senior Vice President at Park Strategies, and the former Senior Advisor for Asia in the U.S. & Foreign Commercial Service. An alumnus of Mendoza College ('99), Mr. King develops business relationships throughout the Asia-Pacific region.

Jae Woong Lee is the Deputy Consul General for the Korean Consulate General in Chicago. He is the former director for Global Green Growth at the Foreign Ministry.

Sara Sievers (panel moderator) is the Associate Dean for Policy and Practice, Keough School of Global Affairs. Among her accolades, she is the founding executive director at the Center for Globalization and Sustainable Development, Columbia University.

This event is cosponsored by NDVotes, the Nanovic Institute for European Studies, the Rooney Center for the Study of American Democracy, and a part of Forum 2016.