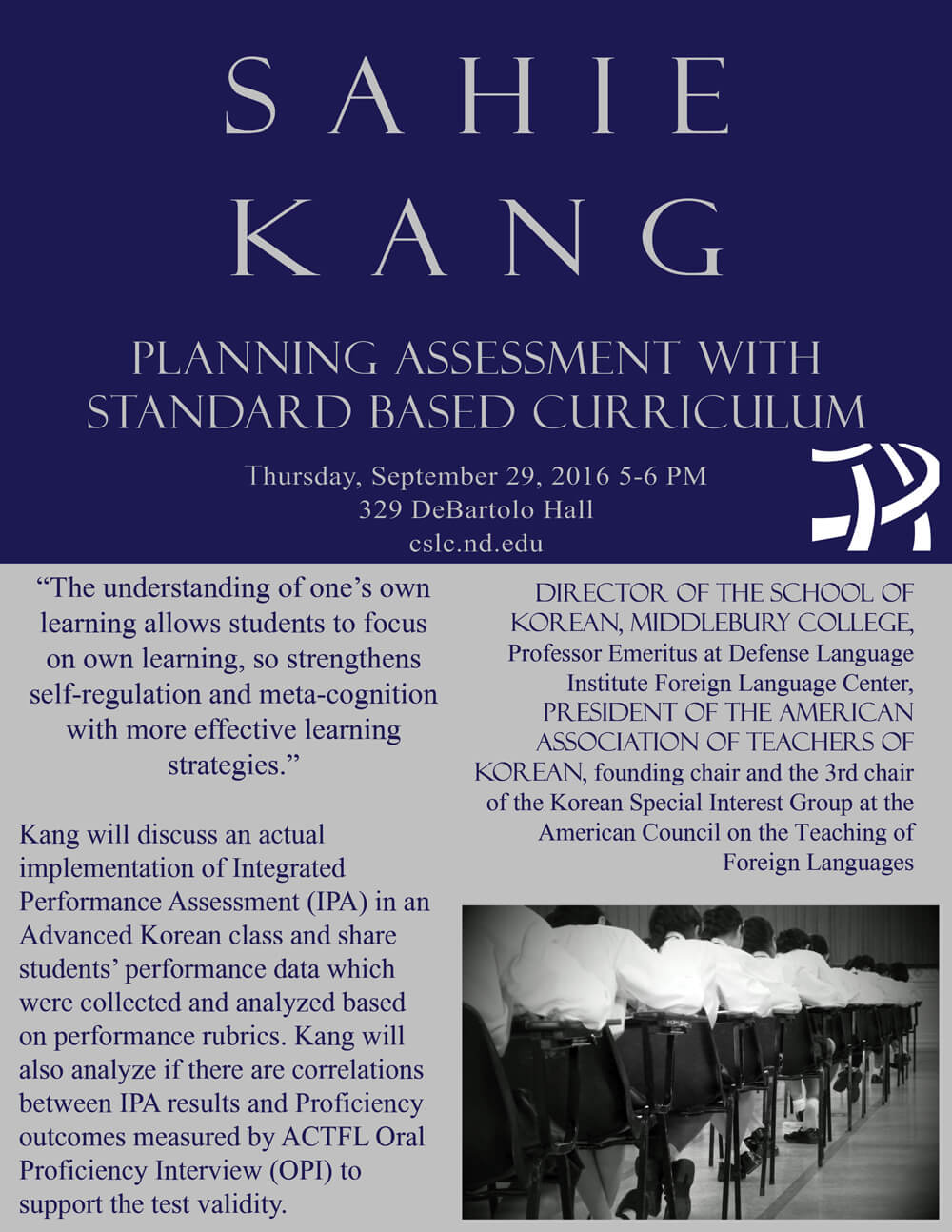 Professor Sahie Kang of Middlebury College will give a lecture titled: Planning Assessment with Standard Based Curriculum. Please RSVP for the event here. This event is sponsored by CSLC.

In a standard based foreign language program, the curriculum and assessment rely on the teaching and evaluation of student understanding with respect to agreed-upon standards, also known as "outcomes." The standards set the criteria for students’ successful demonstration of the understanding of a concept or skill beyond what they “know” about a concept, such that the purpose of standards-based assessment is to connect evidence of learning to learning outcomes (the standards). When standards are explicit and clear, the learner becomes aware of his/her learning with reference to the standards, and the teacher may use assessment data to give meaningful feedback to students about their progresses. The understanding of one's own learning allows students to focus on own learning, so strengthens self-regulation and meta-cognition with more effective learning strategies.

Since “Proficiency Movement” began in 80’s, the efforts to develop learners’ communicative competence along with its assessment try to set clear standards for the students’ proficiency gains.  ACTFL proficiency guidelines are one of the well-adopted proficiency standards which are set in terms of functional abilities, context and content areas, accuracy of performances measured by native interlocuters’ comprehensibility and text types produced by the learners.  ACTFL Oral Proficiency Interview (OPI) is one way to measure speaking proficiency after a significant period of language learning based on the proficiency standards.  Later, Integrated Performance Assessment (IPA, Adair-Hauck, Glisan and Troyan, 2013) model was introduced with modified integrated performance standards to measure students’ on-going performances of integrated skills of reading, listening, speaking and writing during a language course.

In order to verify whether IPA model has validity and reliability, the presenter will discuss an actual implementation of IPA in an Advanced Korean class and shares students’ performance data which were collected and analyzed based on performance rubrics. The presenter will also analyze if there are correlations between IPA results and Proficiency outcomes measured by OPI to support the test validity. At the same time, she will emphasize the significance of “Backward design (Wiggins and McTighe, 2005)” which links learning objectives with the evidences of learning followed by learning activities.  “Backward Design” contrasts sharply with the traditional approach of planning instructional activities first and designing assessment later in the instructional process, so the presenter urges teachers to determine the evidences of learning through effective assessment to verify learning goals before planning any instructional activities.

Sahie Kang (Ph.D. in Linguistics, University of Florida) is the Director of the School of Korean, Middlebury College since 2015 and Professor Emeritus at Defense Language Institute Foreign Language Center.  She is currently the president of the American Association of Teachers of Korean and the founding chair and the 3rd chair of the Korean Special Interest Group at the American Council on the Teaching of Foreign Languages (2006-2009 & 2012-2015).  She has also served as Vice President of the International Association of Korean Language Education (2005-2007). She has been a Master Trainer and tester for the ACTFL Oral Proficiency Interview since 2002 and conducted numerous OPI Assessment workshops in major universities in the US as well as in Korea. Her publications include National Standards for Foreign Language Learning in the 21st Century (with Y. Cho et al, 2010), "Implementing and Assessing Portfolio Projects," (with J. Shannon in TESOL 2008 PAIS ), History of Korean Language Education, (with K. Minn, Hangukmunwhasa, 2005) and "Syllabus Design for the Less Commonly Taught Languages," (with P. Boylan, in Korean Language in America, 2000). She served as a consultant for the Korean Flagship Program at University of Hawaii and for the Proficiency Assessment Project at American Council on International Education, and as an Oversight Committee Member for National Standard Curriculum Project of AATK.