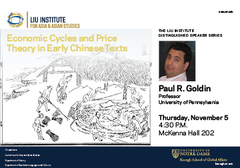 Lecture abstract:
The notion of cycles plays a crucial role in early Chinese economic thought. One such cycle, self-evident to anyone living in an agrarian society, is the year with its seasonal rhythm, but there are also multi-year cycles, including some that can be timed, such as the duodecennial cycle of Jupiter (and its antithesis, the Year Star 太歲). These cycles have two consequential features: they are foreseeable and they affect prices.

A wise ruler will consequently buy goods when they are at their cheapest in the cycle, and subsequently sell them when they are at their most expensive. In practice, this will usually mean buying goods when most other people are selling, and selling goods when most other people are buying--a strategy known today as contrarian investing. Moreover, because extreme prices, especially for staples such as grain, can lead to social unrest, rulers should apply the same general insight to stabilize prices by buying and storing surpluses for subsequent sale in times of scarcity.

This is the origin of the concept of the Ever-Normal Granary. Finally, the recognition of the cyclical nature of price fluctuations went hand in hand with the more general observation that goods are expensive when they are scarce and cheap when they are plentiful. This principle applies equally to money, in accordance with what we now call the quantity theory of money. By requiring that taxes be paid in coin rather than in kind, therefore, a shrewd ruler can raise the relative value of money, and thus ensure that goods will remain relatively cheap for him to purchase when necessary. Together with lucrative government monopolies (especially in the salt industry), such techniques were highly recommended because they promised to raise revenue for the sovereign without the need for onerous taxes. 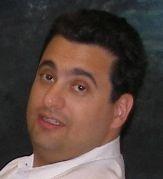 Professor Paul Goldin, University of Pennsylvania, is a leading scholar in the field of early China. The author of five books, three edited books, and many articles, Prof. Goldin’s research covers a wide scope of topics ranging from Confucianism to early China’s culture of sex. Concentrating on intellectual and cultural history, his work also involves archaeology, art history, literature, philosophy, and religion.