Lecture: "Nuclear Poetry and Atomic Fireballs: How to See Through History in English and Japanese"

Lecture: "Nuclear Poetry and Atomic Fireballs: How to See Through History in English and Japanese"
Arthur Binard
Monday, September 21, 2015, 5:00-6:00pm
LaFortune Center Ballroom
A reception will follow
Japanese and English are as different as two languages could be, and when it comes to the Atomic Bomb, the United States and Japan stand on opposite sides of history. Then why is it that the myths and misconceptions surrounding nuclear issues are so strikingly similar in both nations? As an American poet living in Japan, Arthur Binard is well positioned to see through the linguistic smoke and mirrors that have distorted this subject over the past 70 years. His children’s books tell tales that transcend nationality, and his English translations of prophetic poems give us new perspectives on Hiroshima, Nagasaki, and Fukushima. Please join us for an evening of eye-opening literature and lively discussion.
Biography:
Originally from Michigan, Arthur Binard has lived in Japan for the past twenty-plus years earning awards and recognition for his work as a translator, radio personality, poet and anti-nuclear activist. He works across media with a critical, poetic sensitivity. In a recent award-winning collaborative project, Sagashite Imasu (“I Am Searching”; Dōshinsha, 2012), he provided the text to photographs Okakura Takashi captured of artifacts in the Hiroshima Peace Museum. On two-page spreads, readers confront the anthropomorphized loss these objects experience as they search for their lost owners, lost reality in post-nuclear Japan. Binard is the author and co-author of over sixty books and has received nearly a dozen awards.

This event is organized by the Department of East Asian Languages and Cultures Japanese Program, and it is co-sponsored by the College of Arts and Letters, the Liu Institute for Asia and Asian Studies, the Kroc Institute for International Peace Studies, the Institute for Scholarship in the Liberal Arts, and the Hesburgh Libraries. 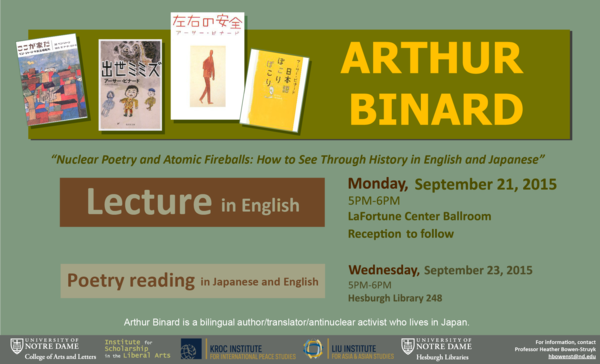