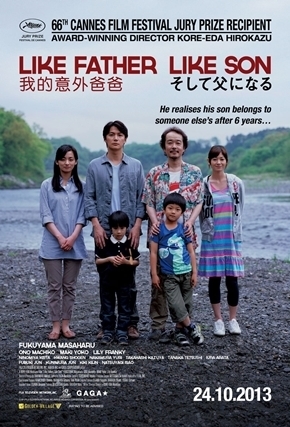 The life of go-getting workaholic architect Ryota (Masaharu Fukuyama)—one of comfort and quietly ordered affluence with his wife Midori (Ono Machiko) and son Keita (Keita Ninomiya)—is violently overturned when he learns that Keita is not his biological son. Due to a mistake made by a negligent nurse, his “true” son has been raised in the disheveled but warm-hearted home of a working-class shopkeeper Yudai and his wife. The familiar “switched at birth” narrative provides Hirokazu Kore-eda with a fresh opportunity to revisit his ongoing preoccupation with family dynamics and parent-child relationships in contemporary Japan.

The Spring 2014 Asian Film Series is proudly presented by the DeBartolo Performing Arts Center, the department of East Asian Languages and Cultures, and the Liu Institute for Asia and Asian Studies. Buy tickets in advance on the DPAC Website.